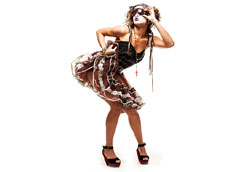 In 2018, musicians have stormed the barricades. Artists who’ve never been political are suddenly writing protest songs. But how many of those musicians are willing to risk arrest for their cause? How many are truly prepared to put themselves on the line? Nicolle Rochelle, who performs as Modern Geaisha, is a musician like that: one distinguished in equal measure by her personal and artistic bravery. She’s spoken out – forcefully – against Bill Cosby, and she’s been ready to risk her liberty in order to make sure her voice isn’t silenced. It was she who was led away from the courthouse in Philadelphia by police, with the words “Women’s Lives Matter” painted on her naked torso. That act of defiance made international news. Now she’s back in the headlines with “Hey Hey Hey”, a ferocious rap song about Cosby that pulls no punches.

For Modern Geaisha – or Mod G, as she is sometimes called – the Cosby controversy is personal as well as political. As a child actress, she appeared on the Cosby Show several times. Her first-hand experience of working with Cosby gives her a perspective on his behavior that few of his other high-profile critics share. When she raps over a skittering, propulsive trap beat about Cosby, she does so in language that is powerful, direct, and astringent. She gives voice to the outrage of the star’s victims, and to thousands of women whose charges of assault against rich and powerful people go unheard. In the scalding clip for “Hey Hey Hey”, she addresses the camera with nerve, swagger, and some justified anger, too. Though her message is a heavy one, she never loses her cool.

The Modern Geaisha project is just the latest in a long and varied list of credits on Nicolle Rochelle’s resume. In addition to The Cosby Show, she’s been seen on NYPD Blue, The Babysitter’s Club, The Chappelle Show, Law And Order SVU, and many other television programs. She’s appeared in Broadway plays, done Shakespeare in the Park, and starred as Josephine Baker in the hit French theatrical production Looking For Josephine. She’s made electro-swing with the Paris-based Gingkoa, and blues and jazz with Nikki and Jules. Modern Geaisha is the most American-sounding of her musical projects, but even here, she deftly incorporates international influences. Wherever she goes, she tells her story, boldly, fully, without edits, without compromise.

Here at HIP Video Promo we’re thrilled to be working with Modern Geaisha and 007 Media Group to share the new minted “Hey Hey Hey” music video with the world. We’d love to see this video added to your cherished programming and online presentations in a timely fashion, so please don’t hesitate to check it out! Rest assured we’ll have plenty of Modern Geaisha merch available for on-air contests and giveaways, so all you need to do is reach out to us and we’ll send you some. For more information on Modern Geaisha please contact Andy Gesner and the HIP Video Promo team at (732)-613-1779 or email us at info@HIPVideoPromo.com. You can visit www.nicollerochelle.com for more info on Modern Geaisha.