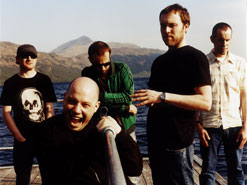 Hello programmers! It’s Andy and the HIP Video Promo staff here with another flawless Sub Pop video release that will tingle the fascination of your audiovisual senses. Mogwai has made a massive and lengthy career out of making music that is meant not only for listening, but for higher appreciation and meditation. Mostly instrumental, the band forges tracks that build on layers of effects and heavily distorted guitars to induce emotion through harmonies and melodies rather than words. In their new single titled “Mexican Grand Prix,” the band injects some vocals into the mix, which is more out of the ordinary for this group. In fact, the use of vocals in this track is not about the words, but more about the actual vocal instrument adding to the already established atmosphere. “Mexican Grand Prix” stands as a departure from the effect heavy, guitar driven sound the numerous fans of this Scottish group may be accustomed to, as it takes a few organ and synth hints from one of Sub Pop’s most dear releases, The Postal Service.

Mogwai’s seventh studio full-length, superbly titled Hardcore Will Never Die, But You Will has been rapidly embraced by both fans of the band as well as the critical sphere. Pitchfork has thoroughly enjoyed the album, claiming that it features the band’s “best guitar lick in years.” The lads at Rolling Stone are even more enthusiastic about the album, pressing that the group is a shining example of how other bands should mature, calling Mogwai “still inventive, still challenging themselves and still insanely loud.” SPIN, not to be outdone, has also fully endorsed the offering, calling it “epic, frequently breathtaking.” These are only a few of the many music publications that are in love with the Scots’ latest work. In fact,AbsolutePunk has given the album a near perfect score of 93%! The band is already capitalizing on all the raving reviews by conducting a massive, world encompassing, headlining tour, with the U.S. leg touching down during this spring. The band’s schedule also includes this year’s major music festivals like iTunes Festival and Bestival.

The “Mexican Grand Prix” music video is a tribute to all the citizens of the band’s home base, Glasgow. The rapidly cut clip features many different people as they are encountered about their lives in the span of a full day. This creates a very interesting perspective on the diversity of our world in just one urban encapsulation. The fast cuts are perfectly synced to the beat of the drums, including all of the snare rolls! This is one of those videos where the viewer need not worry about plotlines or characters and can just sit back, enjoying the diversity of Glasgow’s inhabitants and allowing him or herself to fully entranced by the audiovisual before them.

When Pitchfork mentioned the album features songs with the “best guitar lick in years,” they certainly mean songs like “San Pedro.” The track is laced with just the right of distortion and enough low end to collapse the ceiling! While the song has no lyrics or singing in sight, it most definitely makes up for it with entertaining drum fills and guitar parts. However, what really completes “San Pedro” are all of the fatty bass slides.

The video concept for “San Pedro” takes place in an urban setting and confirms the notion of things looking very cool when in viewed slow motion and set to instrumental music with large (and in charge) drums. The clip has the viewer following a man around the city from various angles. It is as if the viewer is stalking the main character as he walks through various locations of the urban landscape. However, the ending is left to be derived by the viewer’s imagination, as the man stops in his tracks. Could it be that he has finally noticed all of us following him? This clip is as creepy as it is enthralling and must be experienced at least once, and then several times more to look for any hidden clues to its explanation.

It is a magnificent honor to be part of this high profile Sub Pop campaign. It is infrequent to encounter a group that can be as ambient as they are fully upfront as Mogwai. We have no doubts that viewers will allow themselves to be transported to the medium Mogwai intends to take them to, if given the chance. Sub Pop Records has provided us with lots of Mogwai stuff for contests and giveaways, so be sure reach out. If you need more info, call Andy Gesner at 732-613-1779 or e-mail us at info@HIPVideoPromo.com. You can also visit www.SubPop.com, and www.Mogwai.co.uk to find out more about Mogwai.