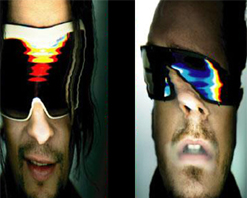 Howdy to all my music loving friends! It’s Andy Gesner and the staff at HIP Video Promo with yet another top shelf clip for your (and your viewers’) enjoyment. You may recall earlier this year we sent you the “Long Before Rock n Roll” video from Mando Diao on Mute Records. We’re now thrilled to tell you that Mute has done it again, and to introduce to you the “Unhuman” video clip from the new European electronic prodigies Motor.

“We’re fighting with the man-machine concept,” explains Bryan Black of Motor. “The machine is struggling to be human but clearly it can’t be.” Black protests too much: few musicians in any genre are as in touch with the soul of the mechanical as he and his bandmates are. Motor makes their machines sing, regularly teasing evocative, expressive – and near-human – sounds from synthesizers and drum-boxes. Like Daft Punk and Underworld, their minimalism itself is an emotional choice: it bears with it the sadness of schematics and blueprints, and the limited possibilities of the modern condition. Few contemporary indie acts manage to be anywhere near as dark, and fewer electronica acts rock anywhere near this hard. The members of Motor put on a cathartic stage show, hurling themselves at their machines, turntables, and microphones as if trying to summon them to life. Here is harrowing 21st Century stomp in the guise of catchy rhythms and synthesizer licks – LED-lit ghosts singing the digital blues.

The genre-defying intensity of their performances has made Motor an in-demand support act, and although they’re still relatively new, they’ve already shared stages with Nitzer Ebb and Kraftwerk. The trio has appeared in North America and Asia as well as their native Europe, and this summer, they’ll be globe-hopping again: over the course of a single month, they’ll be rocking festivals in Budapest, Istanbul, Yokohama, and Chicago. Such are the frequent flier miles that a band with a rabid international audience is forced to rack up – and it’s virtually certain that they’ll be back on the road once the summer festival season is done.

Unhuman, their sophomore effort, promises to further excite fans of the group: it’s a stripped-down punch to the gut, spiked with chanted hooks, vintage drum-machine beats, translucent analog synthesizer, deliciously menacing vocal performances, and further meditations on the uncomfortable intersection between the technological and the organic. Black and writing-partner Hugo Menendez are quick to point out that “unhuman” is not the same as “inhuman” – but they’re not saying whether their made-up word implies a conscious rejection of humanity, an inversion of it, or something altogether different. The title track offers some tantalizing clues, plus a gigantic beat, and one of the most expressive pitch-bent synthesizer riffs you’ll ever hear.

Motor’s clip for “Bleep #1” – the lead track from Unhuman – was startling in its simplicity and unsettling in its effect. A woman in a striped shirt danced under a strobelight, and as she did, her body appeared to twist and warp until it was virtually unrecognizable. The mutation continues in the weirdly fascinating clip for “Unhuman”. Faces flash against a black screen, blinking on and off in time with the backbeat. Many are stretched, elongated; besides that, there appears to be interference in the presentation of the image. They flicker and blur, vanishing before the viewer can come to any firm conclusion about why, exactly, they look so odd. Shadow effects illuminate foreheads and chins, cheeks and open mouths, and each fade into blackness as rapidly as they appear.

Midway through the clip, an undefinable image is superimposed over the faces: it could be leaves, or insect larvae, or something entirely abstract. Red lines could be decorative, or static-errors – or they could be blood. Motor is alienating us from what’s essentially human, calling our essences into question, worrying and widening the digital divide. By the end of the clip, the faces are twisted, grimacing; some are masked, some mouths are held shut with duct-tape. All appear to be under duress, hidden somewhere inaccessible, signs of some ineffable sadness and distortion.

Many thanks are due to Ellena Osis and the team at Mute for giving us everything we need to bring you the Motor “Unhuman” video as well as copies of the Unhuman CD for all your give away needs. If you need more info, call Andy Gesner at 732-613-1779 or e-mail us at info@HIPVideoPromo.com. You can also visit www.Mute.com, or www.din9.com to find out more about Motor.