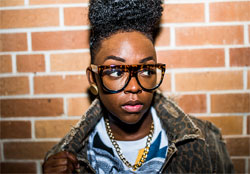 The damage a former relationship or any of life trials and tribulations can have on an individual may seem irreversible at times; it can take a great deal of time before they can truly trust someone again. As life goes on, they will be able to let new people in, but that doesn’t mean they are completely healed. It takes a lot of work to help repair a broken soul, and even then, the damage will still have a great effect on them.

In “Damaged,” the now Orlando-based soul newcomer MoZaic tells the story of her past relationships with family or lovers and the effect they had on her. She shares that entering new relationships of any kind can come with having to deal with and reveal “baggage,” as she calls it. Former incidents of pain and heartbreak have led MoZaic to be this version of herself, though it’s not a bad version; she realizes there are demons that she has to face and come to terms with. Aside from telling her story of pain and despair, MoZaic also uses “Damaged” as a warning for anyone who she makes a strong connection with. She has seen a lot and has had to overcome abandonment and disappoint in her childhood as others have. She may have her doubts, and she may do things in a relationship that seem unconventional, but it is from a caring yet cautious spot. Although “Damaged” sheds light on the negative impacts her past relationships have had, it is meant to be a positive song with an uplifting message. MoZaic highlights self-improvement and the fact that if you acknowledge your flaws and work toward fixing them, things will get better and you will be able to heal previously opened wounds that others have caused. This video also wants to debunk the stigma mental illness has all over the globe, spark meaningful conversation, and possibly touch at least one person who may have baggage and unable to surpass it. She believes that if it can touch one person then her job is done. MoZaic lost a family member to suicide and wants to show the world that there can absolutely be victory over a damaged life!

The video for “Damaged” does a remarkable job with bringing MoZaic’s lyrics and message to visual forefront. The darker setting and colors support the aura of agony and great internal struggle. The symbolism in this video plays a crucial role in illustrating her story. Appearing as a goddess fighting opposing forces draws the connection that she is fighting off the demons of her past and the universal notion that we all have this plight to combat. Her battling with them the entire video implies that this is a factor that MoZaic deals with and takes time to succeed in. Her crown and jewelry represent a being who has been hurt but has done everything she can to move past her struggles, someone who deserves new relationships and a new chapter. Even visual effects toward the concluding stages of the video signify a passage to another mental state, one that has fought off her tribulations. “Damaged” visually and sonically represent the light at the of the tunnel, which is of great significance to MoZaic.

Some artists may be afraid to share their true inner self, sensing it as a sign of weakness, but MoZaic is not one of those artists. She gracefully exposes herself, telling stories that have a great amount of significance to her, while giving listeners a body of work they can relate to. Her biggest message is that no matter what we all go through as they may seem insurmountable they can be dismantled.

Here at HIP, it’s an honor to be working with an artist as honest as MoZaic. We’re certain that you and your viewers will embrace this video and message as wholeheartedly as we have. Rest assured we’ll have plenty of outstanding MoZaic merch to set up online/on-air contests and giveaways throughout the campaign so don’t be bashful about reaching out to get your hands on some. For more info on MoZaic please contact Andy Gesner and the HIP Video Promo team at (732)-613-1779 or email us at info@HIPVideoPromo.com. You can also visit www.MozaicSoul.com for more information on MoZaic.