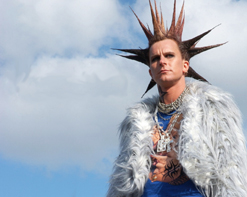 Listen up music video lovers! It’s Andy Gesner and the irreplaceable staff from HIP Video Promo, bringing you more great sounds from an unlikely place. By now, most serious music fans recognize Scandinavia as a pop hotbed. But what of the infrequently-discussed countries across the Baltic Sea from hipster Stockholm – all of which have their own musical traditions? The cleverly-named N-Euro represents Estonia, a newcomer to the EU, and a small nation that has thrived and grown since winning its independence from Russia in 1991. Tallinn, the capital, is a thoroughly cosmopolitan city – and N-Euro makes the kind of music that’s welcomed in cities around the globe. It’s high-gloss, high-energy, infectious dance-pop, suitable for clubgoing, gym-going, or just getting down in the privacy of your home. His material bears the hallmark of all great dance music: Once you hear an N-Euro song, you’re never likely to forget that you did.

The artist makes a striking visual impression, too. N-Euro possesses one of the wildest hairdos in pop history: A spiky, gelled-up starburst that makes his head resemble a lethal weapon. His earrings, designer shades, copious jewelry, and stylish threads all announce his presence with authority, but his most vital accessory is his impish smile. N-Euro has a great, self-deprecating sense of humor — and character radiates from every gesture he makes. His quirky approachability has helped him become a darling of the European dance-music underground. And now, America beckons.

He’s already shown he can reach international audiences: “Noise”, his irresistible lead single, became an under-the-radar smash in discos around the globe. But “Lover On The Line” is the track that’s going to throw the world open for N-Euro. It’s an irresistible dance-floor stomp, filled with huge beats, glittering synths, and a magnetic performance by the producer-vocalist. It’s already been released throughout the EU, and it’s hit the European dance-download charts; this ear-worm has even infected South Africa. In late autumn, “Lover On The Line” hit #1 on Viva’s “club rotation” list – and ever since, thousands of Europeans have been unable to dislodge the mantra-like refrain from their heads.

The clip for “Lover On The Line” is – like the artist’s music – glitzy, sexy, and not altogether serious. N-Euro casts himself as the concierge of the five-star “Grand Euro Hotel.” This giant glass building dominates the skyline of an unnamed Continental metropolis. The Grand Euro is no stodgy relic of the old country, though. It’s completely sleek and modern, sparsely decorated, and flooded with white light. In fact, the only splashes of color in the lobby are N-Euro himself and his bank of pastel telephones. With these, he can communicate with the gorgeous women – in various states of undress – who phone him for “assistance”. At one point, the helpful concierge has five naughty conversations going on at once – and requires the assistance of an extra set of hands. Eventually, talking isn’t enough, and N-Euro rides the glass elevator to the beautifully-appointed penthouses. There’s a choreographed sequence on the roof of the hotel, too; an opportunity for all the girls to shake it at once. N-Euro gets in on the action, too, dancing in front of the skyline, his smiling face flooded with electric light.

Big props to Eric Burns and the crew at 4 Entertainment for bringing us on board to be a part of this promotional effort. We’ve got copies of the “Lover On The Line” single for your on-air giveaway needs, so drop us a line if you’d like to get your hands on some. If you need more info, call Andy Gesner at 732-613-1779 or e-mail us at info@HIPVideoPromo.com.