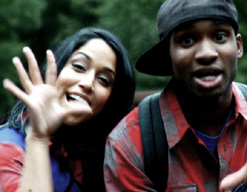 Hello, it’s Andy Gesner from HIP Video Promo, here to help spread the word about a entertaining new video from a worthy independent film project. Here at HIP, we like to think of ourselves as part of a nationwide fraternity of creative promoters and self-starters — and we recognize Joe Young as one of our own. The Connecticut-based cartoonist, writer, animator, and filmmmaker has proven himself to be an enterprising businessman and visionary philanthropist as well as an exemplary artist. Without ever resorting to easy tactics, he’s managed to bring his independently-produced work to national attention.Scruples, his weekly strip, has been featured on the comics pages of newspapers all over America. Through YouTube and other video-sharing sites, his animated specials have inspired thousands of viewers. The Guinness Book Of World Records recognized his hundred-yard cartoon(!) as the longest comic strip ever drawn. He’s also founded the Hartford Animation Institute, an organization dedicated to training young artists. Every step Young has taken has been a confident stride, and Diamond Ruff, his first foray into live-action filmmaking, is certainly no exception.

A decorated community activist and public-spirited citizen, Joe Young’s network of friends and associates stretches far beyond the boundaries of the Nutmeg State. But he’s found some of his most reliable collaborators right at home: for instance, his son, Kyle, a talented vocalist and rapper. Kyle Young handles the emceeing on “Are You Sleeping?”, the first single from the soundtrack toDiamond Ruff. On the choruses, he graciously passes the microphone to accomplished pop singer Natasha Ramos, whose performance here is every bit as sweet as her turn on the Pharrell Williams-produced “Midnight Hour”. “Are You Sleeping?” works as an effective teaser for Diamond Ruff, but it’s also a dynamic, radio-ready R&B cut in its own right, and one that wouldn’t sound out of place on a commercial radio playlist.

Joe Young’s projects invariably boast an inspirational dimension, and Diamond Ruff sends a powerful message that the “Are You Sleeping?” video echoes. The film tells of the search for a mystical diamond that bestows powers of confidence upon its bearer — and the story is fully referenced in the colorful clip. Both Kyle Young and Natasha Ramos (who looks particularly fetching in a hardhat!) take their turn with the hammer and pickaxe, mining the stage set for the hidden gem. The face of James Noble — best known for his role as Governor Gatling on Benson, but who’s starred in many other movies — appears first on laptop screens and cellphones, offering words of encouragement; later, the veteran actor joins the young singers in their quest. Unlike many indie videos, there’s nothing low-budget looking about the “Are You Sleeping?” clip; on the contrary, it’s as brightly and crisply-shot as anything you’re likely to see on MTV. Like everything else that comes from Young Studios, the promotional spot is top-flight work, done by enthusiastic volunteers with the talent, energy, and vision to set their own courses.

We are very excited to be working with Joe Young, Kyle Young and Denise Hannon-Gross at Young! Records to bring you this excellent new video. If you need more info, call Andy Gesner at 732-613-1779 or e-mail us at info@HIPVideoPromo.com. You can also visit www.YoungStudios.biz to find out more.