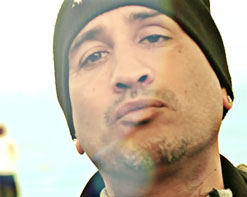 A few months back we brought you the balling new clip by Mr. Loc Fo Real for his song “Bay Anthem.” The song celebrated the thriving Bay Area music scene and celebrated the unique culture of Northern California. To help him deliver his message, he enlisted the help of a fellow emcee, Noodlez. While he played the perfect sideman with his blistering verse, it’s time for Noodlez to step into the spotlight himself and give us a taste of what he’s all about. Today, we’re very excited to bring you the brand new video Noodlez for “Hey Little Mamma!”

In “Bay Anthem,” Noodlez showed his propensity for fast rhymes and sharp tongue. For his own effort, “Hey Little Mamma,” he’s reached into his deep well of talent and presented a more relaxing jam, one that borders as much in the r&b and soul genres as it does in the world of hip-hop. Of course, when the song is in full effect, those details don’t matter. What matters is that this is a song that encourages the viewer to close their eyes and just soak in the laid back vibes being offered up. And much like Noodlez was first brought to us in a supporting role, he has also brought in his own guest emcee, Mawf Peece. Together, they keep the vibrant Bay Area scene going strong with a jam that shows the true power of collaboration.

San Francisco is known for many things, maybe none more than the beautiful landscapes and scenery that seems to exist around every corner. In the new video for “Hey Little Mamma” Noodles takes his special lady on an unforgettable journey around the sites of the Bay Area. Strolling along the Embarcadero, catching the Coit Tower in the distance, and the sweeping beauty of the Marin Headlands all paint a perfect picture for Noodlez to show girl a lovely day on the town. And while Noodlez is engrossed in his moment, Mawf Peece holds down the fort (literally) with his own set of perfectly crafted melodies, delivered from an equally stunning set of locations, including the shores of the legendary Fort Point, underneath the iconic Golden Gate Bridge. Teamwork makes the dream work!

We’re so psyched to see Noodlez step into the forefront for this one, and we’re equally psyched to be by his side as he does so. We would love to get you set up with anything you may need to get this video into your programming, so please don’t hesitate to get in touch! You can contact Andy Gesner and the HIP Video Promo team at (732)-613-1779 or email us at info@HIPVideoPromo.com . You can also visit  or http://www.Twitter.com/mrnoodlez/ for more info.