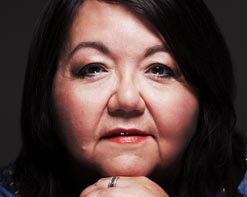 Pop-acoustic-blues artist Norine Braun has been cleverly crafting and honing her wise and confident musicianship with her newest album Conventus The Eye of the Heart. This Canadian artist bridges the gap between singer/songwriter and a rock-and-roll performer. Blending timeless elements such as rock, Americana, soul, and country, Braun presents these genres to audiences around the nation with a bold freshness. HIP Video Promo is excited to introduce the quirky clip, “Lightening Strikes Twice.”

Norine’s music falls somewhere between the intimate, heartfelt approach of folk, and the energy of pop/roots rock. With comparisons to Joni Mitchell, kd lang, and Patti Smith, Braun’s eclectic approach to songwriting and heartfelt performance techniques are the fundamentals of her solid reputation with her local music scene and beyond. She has received recognition from events such as the LA Music Awards, The Best Female Musicians magazine, and many more!

This hardworking, DIY artist released her ninth studio album, Conventus the Eye of the Heart, which was inspired by the concept of “unions,” something that deeply affected Norine’s life. Vancouver’s finest musicians have once again teamed up to join her on the musical journey for Conventus. The new material on the album is a mix of rhythm and blues, roots rock, and continuous soul at its core. Artsy and fun, thoughtful and savvy, Conventus the Eye of the Heart will zing to the heart of any listener.

Her most recent clip “Lightening Strikes Twice” is filled with scenes rich with stories told in Claymation by Hugh Stephens. Entertaining every type of music fan, the song is infused by many different genres, such as blues, rock, and contemporary folk. Telling a tale of satirical irony, Braun presents the talent from her newest album Conventus the Eye of the Heart and beckons fans that may not be familiar with her music. Accompanied by artists Alan Popowitz, Elliot Polsky, Alice Fraser, and Huggybear Leonard, “Lightening Strikes Twice” captivates viewers in the most entertaining ways.

According to DJ Motmot from Songplanet, Norine Braun offers an “amazing, diverse and terrific show”.  From the Triad Theatre in NYC to Shibuya Home in the entertainment district of Tokyo and to the Vancouver 2010 Winter Olympics, Norine pleases audiences nationally and internationally with her jet set appeal and positive demeanor and we are thrilled to bring her video to you! For more information on this exciting new artist, please contact Andy Gesner and the HIP Video Promo staff at (732)-613-1779 or email us at info@HIPVideoPromo.com . You can also visit www.NorineBraun.com/ for more info.