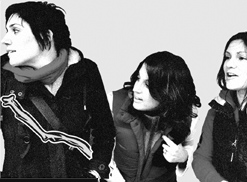 Hey, all you indie rock and hip-hop fans! Andy Gesner along with my accredited staff here at HIP Video Promo, with new music from a band with enough energy to power Con Edison. They’re named after the highway that connects the outer reaches of Long Island to New York City, and they’re inspired by the groups that made “Strong Island” a byword for quality hip-hop. But Northern State isn’t your typical rap act. For one thing, this three-member crew knows its indie rock as well as it does its Native Tongues – and their adventurous music is testament to their polyglot tastes. What’s more, in a genre dominated by displays of testosterone, Northern State stands out: they can brag and boast with the best of them, but these hard rhymers are photogenic young women.

Hesta Prynn, Spero, and Scout don’t dodge their history either – they grew up in suburban Long Island, went to school in New York City, and represent the Empire State proudly. Their microphone skills and their sincere belief in the communicative power of hip-hop have won them the respect and admiration of some of the genre’s best-known figures.Can I Keep This Pen?, their latest release, was co-produced by Ad-Rock of the Beastie Boys and Chuck Brody of Shitake Monkey (best known for his work with the Wu-Tang Clan.) They’ve collaborated with ?uestlove, Pete Rock, and MC Paul Barman, and shared stages with De La Soul, Gym Class Heroes, and The Roots. Few bands can say they’ve opened shows for Talib Kweli and Tilly and the Wall, and impressed the hell out of both audiences. This autumn, they’ll be hitting the road with Tegan & Sara, and bringing their indie-rap hybrid to concert halls all over the North American continent.

Can I Keep This Pen? is a giant step for Northern State, and a more stylistically-varied and satisfying record than any they’ve made so far. Everything they do is well-represented here: “Away Away” is street-smart indiepop a la Luscious Jackson, “Mother May I” rides along on an old-school beat, “Sucka Mofo” is a straightforward hip-hop throwdown. “Better Already,” the lead single, blends all these styles – the infectious guitar-heavy chorus is pure indie rock, but between the releases, the three vocalists trade spirited rap verses. Each of the emcees is distinctive; they’ve all got their own singular senses of humor and characteristic attitudes, and personality oozes from every track they cut.

Director Sean Donnelly perfectly captures the camaraderie and energy of Northern State in his partially-animated clip for “Better Already.” It opens in a typical urban apartment; Sprout is mixing drinks and Hesta Prynn sits on a sofa and sketches a rough picture of her in ballpoint pen. It all seems familiar – until Spero pulls open the window shade on a cartoon wonderland. The three rappers soar out the window and into the phantasmagoria; they ride unicorns and giant butterflies, play with marshmallows, make a visit to a “space mall,” and soar through the ether. The visual effects are bold and bright, but they’re outshone by the pure glee of the members of Northern State. Donnelly keeps flashing the word “friendship” on the screen, but he really doesn’t need to – their joy in each other’s company and the music they make together is wildly apparent.

We’re so excited to have the chance to work with Shaun MacDonald, Rai Sandow and the awesome staff at Ipecac once again! Northern State exudes so much energy, which makes them our type of band to be proud to work with! Northern State is hitting up markets far and wide on their fall tour with Tegan & Sara, so give us a shout if you’d like to set up a video interview when they visit your market. We also have plenty of copies of Can I Keep This Pen? for all of your on-air giveaway needs, so don’t hesitate to give us a shout when you’re jonesing for a copy. If you need more info, call Andy Gesner at 732-613-1779 or e-mail us at info@HIPVideoPromo.com. You can also visit www.Ipecac.com to find out more about Northern State.