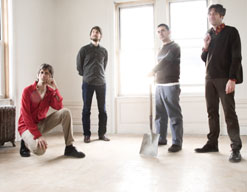 Hey, everybody, it’s your pal Andy Gesner and the crew at HIP Video Promo, here to share a legitimately mind-warping clip from a group of blues-rockers who are no strangers to altered states. At HIP Video Promo, we continue to be amazed at how often independent bands with limited budgets make videos that are every bit as trippy and arresting as the ones made by the high-profile major labels. It doesn’t take CGI or expensive sets and props – all it takes is a good idea. The concept that animates the clip for “Pine On” by Obits is a straightforward one, but it’s undeniably fascinating, and once you begin to watch, we’re confident that you’re going to have a tough time tearing your eyes away from the screen. To summarize, the Brooklyn band has found a way to rearrange the human face – not through camera trickery, but by drawing pairs of eyes on chins and running the footage upside down. The mouths still appear to speak and sing, but the proportions are spectacularly wrong, wonderfully weird, hypnotically grotesque. No technology could have done it any better, or to more arresting effect.

But that’s exactly what fans have come to expect from Obits: remarkably complex results squeezed from simple techniques. On paper, they’re a garage-blues band of the most primal sort – direct, immediate, often startling. But the twin-guitar attack of Rick Froberg and Sohrab Habibian is subtly sophisticated: the constant interplay between the two six-strings remains varied and imaginative no matter how brutal the songs become. Sometimes the guitars circle each other like wary animals in a cage fight; sometimes they charge like battering rams. They howl, they crackle, they bite – and never quite when you expect them to. I Blame You, the band’s debut set, expands on Froberg’s groundbreaking work in the much-loved Hot Snakes – and it isn’t just the fans of Froberg’s older group who’ve noticed. “I Blame You sounds just right”, crows Jason Crock in Pitchfork, “dueling guitars that have refined the echo and twang of surf and rockabilly into a sharp edge, basslines that are less walking than swaggering, drums too respectful and evil for elaborate fills. Yet with all that, it is probably Froberg’s most melodic and diverse record.”

The sense of bizarre menace that always pervades Froberg’s recordings is present, front, and center in the unforgettable “Pine On” clip. The upside-down mouths that sing the song back to the viewer certainly aren’t smiling and happy – in fact, one of the oddest things about the video is that face-reversal makes every smile into a grimace and every frown into a twisted look of satisfaction. All of our cues are inverted, and we’re left destabilized, unsure, but strangely fascinated. (Occasionally, Obits adds upside-down – and yellow – false teeth, too.) If that’s not enough, there’s also footage of the band playing “Pine On” in tall masks that make their heads appear to be elongated cylinders. We’re not given much time to appreciate the weirdness; after that, we’re taken right back to the mouths, cameras zooming in fast on the reversed lips, the chattering teeth, and the strange, unearthly expressions of the singers.

Many thanks to our friends Kate Jackson and Lacey Swain at Sub Pop for delivering another winning clip for us to add intrigue to your upcoming programming. If you need more info, call Andy Gesner at 732-613-1779 or e-mail us at info@HIPVideoPromo.com . You can also visit www.SubPop.com or www.ObitsUrl.com to find out more about Obits.