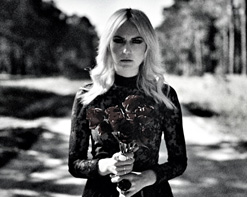 Perth, Australia’s soulful songstress known as Olive commands your undying attention in her new single, “Senseless”. Her debut single, “Changing The World” dropped on Earth Day 2017 to coincide with global consciousness about environmental sustainability. With such a righteous introduction as an underground artist, she’s left new fans rife with anticipation for her next move. “Senseless” is a dagger digging into her heart with a haunting music video that proves this follow up was worth the wait.

The sonic patience of “Senseless” is evident in the first notes played on the guitar, as the band waits to drop until the riff has ended. Building just one layer at a time, Olive’s compelling and other-worldy vocals tip toe on top of the verse groove. Making her way like a spider crawling up its web, her voice climbs the ladder of intensity with each line she delivers. A certain pain coats her words as she unleashes on lines like “You cry out loud / No one there to hear the sound.” Producers, Dylan Ollivierre and Matt Gionatti were able to achieve a musical mosaic with the simplicity of drums, bass, guitar and strings. In an electronic-dominated world of music, these nuances don’t go unnoticed, and with Olive’s sweet and sour post-Winehouse style, the team have struck gold with “Senseless”.

The accompanying music video shows Olive ruminating through abandoned woods dressed in funeral attire with her bare feet to the ground. Videographer, Zac Gordon and director/editor, Elaine Smith created mourning imagery that follows along the path of Olive’s heart dropping lyrics, sourcing the emotional hole from which they came. A mysterious man watches her as she drowns in her feelings sitting in an old chair with a tight grip on the bouquet of roses in her hand. As if in a trance, she follows the preacher man to his car, and he takes her to the place where her lost lover lies, six feet beneath the ground. She places her roses by the tombstone as her wounded heart weeps beneath the setting sun.