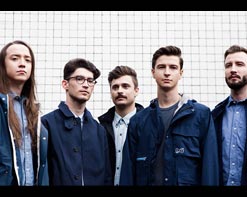 One of this year’s biggest and best surprises has been the emergence of Russia’s own On-The-Go on the international stage. Their recent video for “Keep Pretending” captivated audiences with it’s cinematic mash up of live performance, behind the scenes footage, and sweeping audio that is appropriately described as “comfortably sitting somewhere between acts like Bon Iver, Wild Beasts, and Boards of Canada.” For their follow up video “Brother” they’ve kept much of the winning formula intact, but refining their touch to create something that puts that is both arresting and stimulating.

It has been a busy year for On-The-Go. They released their new album Young Hearts, a collection of tracks simultaneously reinventing what we know about pop, indie, and electronic music all at once. Young Hearts rose as high as #3 on the Russian iTunes charts, continuing on the success of their previous releases, 2009’s Self-Titled, and 2011’s November. They’ve also been relentlessly touring the European and Russian festival circuit this summer. Stops in Saint Petersburg, Belarus, Moscow, Ukraine, and others have placed them in front of thousands of fans, and opening spots for artists like Keane, She Wants Revenge, The Horrors, and more have assured that they are winning over each and every one of those fans.

“Brother” relies heavily on the power of slow motion to create its dramatic delivery. The band performs in a bare white room in between scenes of overcast cityscapes and wandering the streets. Strategic red lights illuminate the darkness as the story mimics the lyrics, representing two once-close souls traveling on their opposite paths on life. The video doesn’t rely heavily on fancy effects or cheap tricks to pull off its impact, but rather a keen eye for cinema, and the results are an exceptional clip worthy of any audience’s attention.

We are very excited to once again be working with the On-The-Go camp and to help spread their name to a more prominent audience. We would love to hook you up with a copy of Young Hearts, or anything you may need to get this video into your programming. For more information on this exciting Russian band, please contact Andy Gesner and the HIP Video Promo staff at (732)-613-1779 or email us at info@HIPVideoPromo.com .