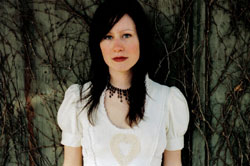 Greetings to my esteemed programming pals! It’s Andy Gesner and the staff from HIP Video Promo, back with another brand new video from a superb independent act. Wherever she’s played – whether in Little Red Rocket, Azure Ray, Now It’s Overhead, or on her own – Orenda Fink has captivated indie audiences with her passion, her incisive intellect, and her accomplished writing. Long considered the harder rocking half of the Azure Ray songwriting duo, Fink’s music displays a depth and grit uncommon in dream pop or indiepop. If her composition recalls the best (and catchiest) moments of Throwing Muses, that dog, and Belly, she has always made sure that she has matched her pop songs with production that is challenging and sonically varied.

Now, with Invisible Ones, Fink has taken her most adventurous step forward. Inspired by a trip to Haiti, the songwriter and frontwoman has reoriented her own writing proclivities – away from confessional explorations and toward a more outward-looking sensibility. Always socially conscious and astute, Fink’s explorations in the Caribbean have compelled her both to engage more closely with geopolitics and to broaden her own musical palette. Songs on Invisible Ones deftly incorporate Haitian and Latin musical tropes into Fink’s formal pop. But this is no dry exercise in anthropology – rather, the Omaha singer has allowed her encounter with the islands to re-energize her. The result is an entirely successful venture in cultural cross-pollination, and perhaps the most courageous album ever released by the famously gutsy Saddle Creek Records.

“Bloodline”, the first single from Invisible Ones, isn’t quite as overt about displaying its Haitian influence as some of the other songs in the set. Nonetheless, its heavy rhythm and emphasis on primal release marks it as consistent with the boundary-blurring project. Over a swampy bass groove and stinging guitar, Fink weaves a story of family betrayal and illicit contact. The singer incants her disturbing lyrics in a voice that often resembles Chrissie Hynde’s; “just let your body do the rest”, she purrs, perhaps echoing the voice of her assailant. It’s a gripping narrative, a memorable melody and track, and an exciting introduction to Orenda Fink’s solo direction.

Nik Fackler has directed many outstanding videos for Saddle Creek artists: The Faint, The Good Life, Azure Ray. Now, he turns his talents and dark vision to Orenda Fink’s music – and, unsurprisingly, it’s a fruitful match. As he showed in the animated clip for T&TW’s “You And I Misbehaving”, he’s particularly haunted by the woods, and shadowed by the spectral forces they conceal. The “Bloodline” video isn’t animated, but Fackler manipulates the images of Fink and her surroundings to trippy effect: first, her face is blurred, then, it is illustrated with tribal markings.

In the “…Misbehaving” clip, images of a safe, suburban home are juxtaposed with an arboreal phantasmagoria that is incompletely tamed by the characters. The “Bloodline” video takes this association one step further – here, the “comfortable” house is a stark southern plantation, the forest has become fully nightmarish, and the main character surrenders to desperation. Fink lies on the grass outside the old manor, eyes staring at the too-bright sky, haunted by a glowering father figure and the ghost of the child she once was. Her body streaked with elaborate patterns, she tries to reconcile these phantoms under the cover of night, only to find they follow her into the daylight.

Like you, we’ve come to expect unique and truly organic projects from the Saddle Creek stables, and we couldn’t be more stoked to be championing Orenda’s new solo project. The brilliantly textured Invisible Ones hits stores August 23rd, but we have a number of advance copies for on-air giveaways so please get in touch. If you need more info call Andy Gesner at 732-613-1779, or email info@HIPVideoPromo.com. You can also visit www.Saddle-Creek.com or www.OrendaFink.com to find out more about this talented young singer/song writer.