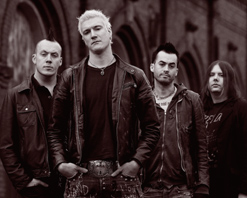 Hello fellow rockers! It’s Andy Gesner and the staff from HIP Video Promo, here today with a raw, fresh, and exciting clip from Seattle’s favorite independent hard rock band, Point One. The Point One sound has been honed by countless live performances on stages large and small throughout the nation. The quartet has toured the country with Sevendust and Diecast, and set heads banging from coast to coast. They’ve rocked festivals in Seattle with Godsmack, Buckcherry, Candlebox, BlackLight Burns, and others. Washington State radio listeners are well-familiar with their songs: Point One’s singles have aired on mainstream and active rock stations. But although their chops are impeccable, the respect of their peers is secured, and their stage show is second to none, the band wouldn’t be anywhere near as exciting as they are if it weren’t for the omnivorous tastes of the members.

Few heavy bands cite Metallica and Radiohead as equal influences, and fewer still can integrate pop melodies and rhythms into their sound without sacrificing any wattage. Unlucky Stars is a testament to Point One’s flexibility as well as its fury. Catchy riffs come first, of course – but as long as the thunder is in place, these musicians are more than willing to experiment. Several songs on Unlucky Stars incorporate elements from progressive metal and even melodic ballads; others, like singles “Oxygen” and “Monochrome Mistress”, are straight-ahead take-no-prisoners hard rock, reminiscent of G’n’R and classic Crue.

That’s not to suggest – even for a second – that they aren’t cleverly-assembled. “Monochrome Mistress” charges ahead, powered by a catchy, grinding bass and drum groove – but it ebbs and flows, too, building from a deceptively-placid bridge to a thunderous climax. Charismatic frontman Len Hotrum howls about a dangerous woman who’s made a noose of his heartstrings; but he’s not complaining, hell, he loves her for it. Behind him, the responsive rhythm section of Darren Howard and Chase Culp ratchets up the intensity, and the singer punctuates the verses with screams. By the time Keith Wright contributes his scalding six-string solo, the mix is already at a boil.

Point One is part of a coterie of Northwestern hard rock bands who count the energetic and exuberant Gwen The Denmother as a supporter. The Denmother has been one of the anchors of the Seattle indie music scene for more than a decade, and her band photography and video work has made her indispensable to the causes of the musicians she’s adopted. Her clip for “Monochrome Mistress” captures Point One at their frenetic, dizzy, sweaty best. The concert footage is a blur of light and color – and the audience, poised on the precipice of delirium, responds to the wild display of rock abandon before them. The Denmother singles out individual fans and shoots them, in all their freaky and inebriated glory, reacting to the words of the song. But she saves her best shots for Hotrum. She finds him in silhouette, singing into a microphone, and gyrating to the beat in front of a twisted wall-painting. The Great Northwest has a rep for rainy, reflective indiepop, but Point One and the Denmother prove that Seattle can still rock.

We would like to thank everyone on the Wenzl-Hopper/Adrenaline Records team for helping to make this happen. They’ve also set us up with lots of copies of Unlucky Stars for all of your on-air giveaway needs, so please don’t hesitate to be in touch. If you need more info, call Andy Gesner at 732-613-1779 or e-mail us at info@HIPVideoPromo.com . Y