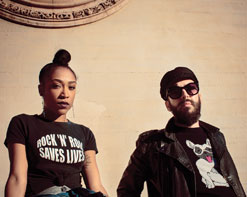 PYYRAMIDS is the product of a creative union between two minds joined together from across a great distance. This dark, yet angelic musical combination based out of Los Angeles intertwines modern and classic elements to make up this fusion of indie rock. HIP Video Promo is pleased to be working with Paracadute to bring you this unique musical collective. Without further adieu, we present to programmers and contemporary music fans with the tantalizing music video for PYYRAMIDS’ newest single “Do You Think You’re Enough.”

Comprised of Tim Nordwind from OK Go and Drea Smith of He Say/She Say, this enigmatic duo first bonded over an affinity for first-wave British post-punk music and 80s Manchester bands. After a mutual friend introduced the pair via e-mail, a fast friendship began and musical ideas emerged. Nordwind is known for his productive beat making where Smith takes on the role of lyrical genius, and the two feed off each other’s energy. Smith had written a handful of songs before meeting Nordwind in person, but over time, PYYRAMIDS developed a sound favoring stripped-back instruments mixed with electronic beats.

In 2011, Pyyramids released their first EP Human Beings on the Paracadute label. The six-song EP gained much praise within the scene of underground music bloggers across the globe. Last year saw PYYRAMIDS translate their sound from the online arena out in to the world with live shows throughout Los Angeles, San Francisco, Washington DC, and New York. Following the success of their live performances, the band wrote and recorded the tracks that were fated to become PYYRAMIDS’ first full-length album Brightest Darkest Day set for release on April 9th of this year. Mixed by Dave Fridmann known for Flaming Lips and MGMT and Dan Konopka of OK Go, Brightest Darkest Day finds PYYRAMIDS venturing into fresh territory, and experimenting with sonic landscapes on the album’s title track. Their newest video “Do You Think You’re Enough” gives us a glimpse into the mysterious and creative world of PYYRAMIDS.

The clip for “Do You Think You’re Enough” displays PYYRAMIDS at their finest—performing one of their most powerful and energetic tracks from Brightest Darkest Day, we watch as the band captivates us with their electric energy. The song itself includes strong undertones of classic feels as it blends with modern indie rock to transcend contemporary music. Nordwind and Smith have an imaginative presence as the video goes on, and the song flows perfectly from scene to scene. The catchy and upbeat guitar riffs go hand in hand with Drea’s vocals, which echo certain timelessness that is hard to ignore.

The “Paper Doll” video is a genuine harkening back to the early 120 Minutes styled videos from the early days of the Seattle scene with static in the picture, obscure and unusual costumes, and washed out colors that all combine for a visual trip. At its core is the song for “Paper Doll”, which is arguably their best offering yet. The crunchy guitars and smashing drums are the ideal compliment to Drea Smith’s angelic voice. Don’t miss out on this soon-to-be smash hit!

Pyyramids is one of the best bands to emerge on the scene in years, and the story behind the creation of this mysterious duo is noteworthy. Their music redefines indie rock and their eclectic approach and unique capabilities go beyond typical rockers. For more information on this exciting new band, please contact Andy Gesner and the HIP Video Promo staff at (732)-613-1779 or email us at info@HIPVideoPromo.com . You can also visit www.PYYRAMIDS.com for more info on Pyyramids.