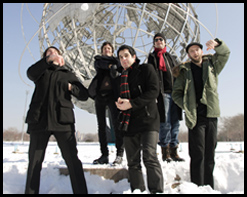 Attention music video lovers!!  It’s Andy Gesner and the staff from HIP Video Promo, back with another intriguing video from an established indie favorite. A few months ago, it was our pleasure to send you the first clip from Enemies Like This, the critically-lauded fourth album from Radio 4, and now we are pleased to present you with “Packing Things Up On The Scene”, directed by Tim Sutton.

Since the summer release of Enemies Like This, Radio 4 has been impossibly busy – appearing on Late Night with Carson Daly, doing radio sets, and breaking into the CMJ Top Ten for the first time. Popular demand has taken the quintet around the globe: they toured France, Spain, and Germany, sold out the Metro in London, and they even rocked the Motomix Festival in Brazil. Now they’re back stateside, and, of course, they’re planning more shows here: a run up and down the East Coast. Such is life when your stage show is as incendiary as Radio 4’s, and when your latest album has won converts worldwide.

But at heart, they’re a New York City band, mastering angular Brooklyn-style dance-punk before it was a craze, and fusing grimy Downtown punk with the sound of classic politicized British bands like The Clash and Gang Of Four. After the sonic explorations of 2004’sThe Stealing Of A Nation, Enemies Like This is a return to the basic Radio 4 sound, and a successful attempt to bottle the band’s live energy for mass consumption.  On “Packing Things Up On The Scene”, Roman spins out a clever, coded protest against the culture of corruption, and wonders aloud whether future generations will be able to fight their way out of the mess handed to them by their elders.

Many thanks to Krista Crews and the team at Astralwerks for keeping us well stocked with copies of the Enemies Like This CD and all sorts of other goodies for promotional giveaways, including Radio 4 stickers and buttons. If you need more info call Andy Gesner at 732-613-1779, or email info@HIPVideoPromo.com. You can visit www.astralwerks.com or www.r4ny.com to find out more about Radio 4.