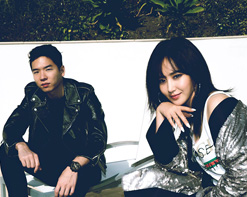 Korean popular music is wide, ambitious, and varied, and loaded with great songs and colorful talent. Alas, it doesn’t intersect very much with U.S. pop, but as more and more Americans wake up to the excellence of contemporary Korean artists, that unfortunate reality is bound to change. When it does – and it certainly will – you can expect Raiden to be riding the wave. The young songwriter, beatmaker, producer, and multi-instrumentalist continues to build bridges between Asian and North American music. “Always Find You”, his latest, is also his sturdiest: it’s a dazzling, irresistible electropop confection that’s bound to find audiences on both sides of the Pacific.

He’s joined on the track by one of the most identifiable figures in Korean music – vocalist YURI of the superstar group Girls’ Generation. The K-pop sensation has sold over 4 million records worldwide, topped the Korean album charts four times, and, in a sign of their growing international audience, placed their last four sets on the Billboard Heatseekers charts. YURI (Girls‘ Generation) is also a film and television performer, and has won several nationwide awards – and an enormous audience of devotees – for her acting. She’s also distinguished herself as a connoisseur as well as a pop star, contributing to the writing of the Girls’ Generation albums and choosing adventurous musicians to work with.

Given that, it was inevitable that she’d collaborate with Raiden. The young artist has, in his short but meteoric career, emerged as a flexible, visionary producer with a distinctive sound and a knack for pop song-craft. “Heart Of Steel”, his 2016 single, scored the after-movie for the massive Ultra Korea electronic music festival and earned him recognition worldwide – both Martin Garrix and David Guetta aired the track on their radio shows. “Always Find You” is even more infectious, and it’s certain to cement Raiden’s reputation as an irrepressible talent who cannot be contained by national borders.

YURI, naturally, is the visual focus of the “Always Find You” clip.  We watch her in a hotel in a tropical vacation spot, on the streets of a city with her equally graceful and glamorous friends, dancing in a club – whatever she does, she looks terrific doing it, and it’s easy to see why she’s become one of the most popular actresses in Korea. But Raiden gets plenty of screen time, too. He’s the main attraction at the club where YURI (Girls‘ Generation) and her friends go looking for adventure, and from the confidence he exudes onstage, it’s pretty clear that he’s more than capable of providing it.

We’re all very excited to be working with Raiden and the entire Protocol Recordings team once again. They’re the best of the best in the EDM world, and we are certain that you and your viewers will embrace this new music video as wholeheartedly as we have here. Please don’t be shy about getting in touch to let us know what we can do on our end to get the “Always Find You” video included into your programming and rest assured we’ll have plenty of outstanding Raiden merch to set up online/on-air contests and giveaways throughout the campaign. Please contact Andy Gesner and the HIP Video Promo team at (732)-613-1779, email us at info@HIPVideoPromo.com. You can also visit www.ProtocolRecordings.com for all-things Raiden / YURI.

For info about other Raiden music videos, click HERE