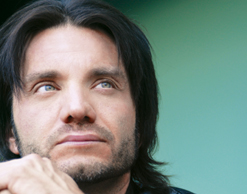 Howdy programming friends! It’s Andy Gesner and the HIP Video Promo staff, here with a clip from a young Music City favorite who is rapidly developing a nationwide audience for his courageous, plainspoken songwriting. Call Richard Jaymes country, and he won’t mind – there’s plenty of C&W grit (not to mention violin and steel guitar) on Dollar And A Dream, his engrossing debut. But his music also merits comparisons to classic Southern rock groups like The Black Crowes and Little Feat; beyond that, Jaymes draws heavily on the long traditions of Dixie blues and Nashville acoustic folk. His music is an amalgam of American styles, delivered with the ease and comfort of a natural cross-pollinator. Country fans love it when he stomps on the distortion and turns up the guitar, rock listeners appreciate his deep understanding of the blues and roots music, and traditionalists respect his resolution to always put the song first. His impulses are inclusive, and his come-one-come-all aesthetic is both infectious and persuasive.

Jaymes is also outspoken – a man of the people who isn’t shy about voicing his heartfelt opinions. The uptempo title track for “Dollar And A Dream” takes on the recession, mass foreclosures, deficit spending, and the controversial bailout of Wall Street banks. Like millions of Americans, Jaymes thinks there’s something deeply wrong about using tax money to help the wealthiest – especially when so many ordinary people in Nashville and his hometown of Orlando have lost their jobs and their homes to the downturn. Unsurprisingly, “Dollar And A Dream” has struck a chord with listeners: not only has it been slotted into rotation on rock and country stations alike, but it’s attracted the notice of several mainstream news organizations. Jaymes was recently invited to appear on FOX News’s Strategy Room; by the time you read this, the singer will have spread his message to millions.

Of course, it wouldn’t matter how articulate Richard Jaymes was if his music wasn’t so compelling. Crisply-played and passionately-sung, “Dollar And A Dream” has all the hallmarks of a crossover hit: it’s a song of the moment that, paradoxically, feels timeless. It’s not a lecture, either – Jaymes knows plenty about the current events discussed in the song, but the singer refrains from telling the listener what to think or how to react. He expresses his bewilderment and confusion, and in so doing, he gives voice to the distress of countless Americans. Compassion and wry, self-deprecating humor are his tools, and they’re used with a surgeon’s precision on his debut album – consider “Miss America’s Got The Blues”, a song for a faded beauty queen, or “Four Leaf Clover”, a rueful message to a lost love.

That same sense of compassion animates the beautifully-shot clip for “Dollar And A Dream”. Here, Jaymes shows us scenes from the same sorts of ordinary American lives that he sings about: a girl drawing pictures for her mother, a property-owner coping with the strain of foreclosure, a hardworking waitress struggling to feed her family. But there’s a seamy side to Main Street, too, and greed is hardly the sole provenance of wealthy bankers. The waitress’s boss pockets money from the cash register and abuses his relationship with his employees, and there’s very little that the sympathetically-drawn characters in the clip can do about it. Meanwhile, guitar in hand, Jaymes pours out his lament in a deserted factory – golden sun streaming through the high windows, illuminating the singer, his characters, and the small American towns he represents so well

It’s a pleasure to have the chance to work in tandem with Richard Walkowiak and Shotgun Entertainment to bring you this heartfelt new clip. He has hooked us up with lots of copies of Dollar And A Dream for your on-air giveaway needs, so please don’t be shy to reach out to get some! If you need more info, call Andy Gesner at 732-613-1779 or email us at info@HIPVideoPromo.com.