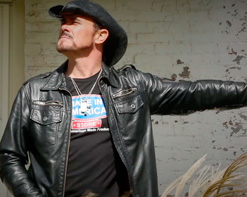 Chances are you’ve never heard of Altoona, Pennsylvania. Nestled in the center of the state amongst the Appalachian Mountains, it’s the kind of town that folks like to talk about as a prop for stump speeches and often times relegated to a statistic about jobs, income, and red vs. blue. But spend a little time in Altoona and, much like small towns all over the USA, you’ll see that what the town is really made up of is an unbreakable sense of community that prides itself on being blue collar and red blooded. It’s this sense of deep-seeded patriotism that inspires Ricky Lee to pen his own brand of country music that celebrates the American dream, which we’re proud to bring you today by way of the “Looking For America” video.

Ricky Lee isn’t someone who just talks a good game either. With plenty of songs about the mannerisms of the good old days and respect for the sacrifice of the American soldier, Ricky is always looking to give back with performances at VA hospitals and veterans associations whenever possible through his Music-4-R-Vets program, and an unwavering support of the American working class. Ricky and his backing band The Mustangs deliver a stage presence that not only drives home his message with conviction, it also gets the crowd on their feet and dancing, every time, without fail.

The self-directed video for “Looking For America” is Ricky’s celebration of all things past and present that he loves so dearly about the land of the free and the home of the brave. Ricky traverses the nation’s countryside, his towering presence an imposing figure at every stop, as footage of all-things-America scroll across the screen. Hometown parades, football under the Friday night lights, and soldiers home and abroad each serve as a reminder of the words of President Ronald Reagan that open the video. “We must act today in order to preserve tomorrow. And let there be no misunderstanding, we’re going to begin to act, beginning today.”

It’s our profound pleasure to be working with Ricky Lee and to give him the opportunity to bring his message to “Keep patrioitism alive so freedom never dies” audiences across the continent. We would love to have the chance for you to catch Ricky Lee live, or even hook you up with some of his excellent merch for viewer giveaways, perhaps even some of Ricky Lee’s America’s Best Chili (which can also be found in the renowned Made In America Store)! Please contact Andy Gesner at HIP Video Promo at (732)-613-1779 or email us at info@HIPVideoPromo.com. You can also visit www.RickyLeeMusic.com or www.Facebook.com/pg/Ricky-Lee-130171143659763 for more info on Ricky Lee.