The Rocket Summer “Skies So Blue” 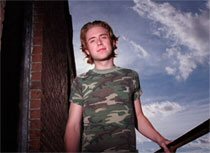 Southern California indie-rock powerhouse The Militia Group and HIP Video Promo have teamed up to present “Skies So Blue,” the Darren Doane directed debut video from the independent label’s newest “feel good” guy, The Rocket Summer. In a musical era where exuding happiness, enthusiasm and ebullience ain’t too cool, The Rocket Summer puts most of the emphasis on the positive and isn’t afraid to smile.

Barely out of his teens, Bryce Avary is a cheerful lad, that’s for sure. Avary, a young Texan, IS The Rocket Summer: he produced and played all the instruments on the new Calendar Days album, which includes the featured track of this video, “Skies So Blue.” He strolls around his suburban neighborhood strumming his Telecaster, his face lit up by a perpetual thousand-watt grin, stopping by the discount store and pausing to kick around a soccer ball on a patch of verdant green.

Musically, the song is upbeat and twangy, tasteful and tuneful, clean and crisp as a bracing fall afternoon. Avary’s guitar playing is precise and lyrical, and the craftsmanship displayed by his songwriting is impressive in one so young. There’s no complex structure or layers of overdubs going on, but the space left vacant in the song’s production contributes greatly to the impression of wide open spaces and “Skies So Blue.”

Any programmer that adds the video for the dates of May 23rd and May 26th enters a drawing to win the complete catalog of The Militia Group’s all star lineup (The Beautiful Mistake, Tora! Tora! Torrance!, Rufio, Copeland etc). The prize package will also include all kinds of extra cool goodies like t-shirts from the aforementioned bands, buttons, guitar picks and stickers. And The Rocket Summer is going on tour! Bryce will being going out with at least one fellow musical kindred playing drums and is planning to visit your market in 2003. Contact Andy Gesner at HIP Video Promo for tour dates and copies of The Rocket Summer’s new CD Calendar Days at 732-613-1779 or e-mail info@HIPVideoPromo.com.