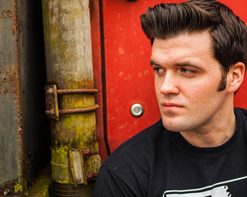 Raised just a stone’s throw from Angola State Prison, home to Lead Belly and the setting of the book and film Dead Man Walking, Rod Melancon absorbed the Louisiana swamps and bayous of his childhood. With a classic American appearance that could easily find him cast as Elvis or James Dean in a biopic, Melancon traveled to Los Angeles intending to become a professional actor.

Yet when he returned to Louisiana from Los Angeles for the Christmas holiday, Melancon saw his grandfather’s tears as he listened to a Hank Williams record Melancon had given him. Those tears touched young Melancon to his core. It inspired him to dive headfirst into his musical career, one that digs deeps into his Louisiana roots where he finds tales of family, life, death, and redemption.

He’s performed everywhere from LA to Nashville, absorbing the knowledge of contacts such as Dave Cobb (producer for Jamey Johnson and Shooter Jennings) and Brian Whelan (guitarist for Dwight Yoakum.) Following up to his 2014 debut Parish Lines, Melancon is set to deliver LA 14, a stunning set of songs that creates the perfect amalgamation of Richard Thompson’s blissful baritone, Bob Seger’s love for middle America and Tom Petty’s story-telling prowess. The first single, “Perry,” is a powerful lead-off, with a healthy amount of wit and grit that carves out a unique spot in to the Americana genre.

The video for “Perry” wastes no time establishing the song’s subject as quite the character, and not one to mess with. The video is a cool mix of danger and exhilaration watching the story of the rough-around-the-edges Perry (played by Melancon) unfold. Even being set in contemporary times it still has a palpable sense of vintage feelings with the local gangs and the colorful jackets. It feels like Grease meets Yeasayer. Poppy, but very dark. While many artists will cross the censorship line with undesired consequences, the video’s use of fruit as a stand-in is an excellent metaphor that drives the message home.

It’s a pleasure to have the chance to work with the folks at Blue Élan Records once again to bring you another video of exceptional quality. Please get in touch with Andy Gesner and the HIP Video Promo team at (732)-613-1779 or email us at info@HIPVideoPromo.com . You can also visit http://www.BlueElan.com/ or http://www.RodMelancon.com/.