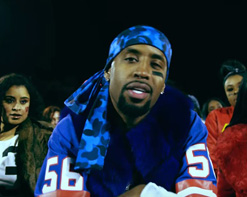 Wait, did he really say that?

Wait – play that back!

That’s the sort of reaction Safaree gets to his incendiary verses. The New York emcee comes with relentlessly clever rhymes, a flurry of punchlines, audacious one-liners, straight, uncensored truth from an artist who has never had any difficulty speaking out. Quick-witted, rude, and hilarious: a winning combination. “NFL”, his latest single, is four minutes of hard rhyme over an irresistible trap beat, without a wasted word or a dip in energy. As always, Safaree makes every second count.

It’s records like this one that have made Safaree a rapper of consequence, and kept him relevant for over a decade in the notoriously competitive New York City hip-hop scene. He formed his first crew with Nicki Minaj in the early ‘00s, and he’s continued to work with her, writing the confrontational “Did It On ‘Em” for Pink Friday plus six other tough-minded tracks from Roman Reloaded, and appearing in several of her videos. He’s taken his talents to the small screen, too, starring in the Hollywood and New York versions of Love And Hip Hop. Through it all, he’s built a truly impressive network of fans: he’s amassed millions of YouTube views for his clips, attracted 100K listeners a month to his Spotify page, and scored 1.1 million followers on Instagram.

Fur Coat, Vol. 1, his latest project, is an independent release – but it’s taken off like a major-label album. The mixtape has been streamed more than 20,000 times on Datpiff, and lead single “Paradise”, a collaboration with Sean Kingston, has become a YouTube smash. “Paradise” is Safaree at his most radio-friendly; “NFL” is the lean, ferocious, take-no-prisoners version of the rapper. But no matter what side of himself he’s showing you, you’re going to get something stylish, and you’re going to have a tough time tearing your eyes – and ears – away.

Safaree puts his television experience to work in the entertaining clip for “NFL”. He knows just how to address the camera, how to stride across the frame or strategically retreat, and how to appear personable even when he’s spitting fire. Director Peter Dmitriyev keeps the focus on the emcee – but includes plenty of footage of beautiful women, too. Sometimes they’re caged with the rapper, sometimes they’re running wild on the football field, sometimes they’re just acting lasciviously in the locker room. Wherever they go, they’re bringing the party.

Here at HIP Video Promo it’s our pleasure and profound privilege to be working with a firebrand artist like Safaree; he’s definitely somebody you’ll want to have on your radar! We are quite certain that you and your viewers will embrace this new music video as wholeheartedly as we have. Please don’t be shy about getting in touch to let us know what we can do on our end to get the “NFL” video included into your programming and rest assured we’ll have plenty of outstanding Safaree merch to set up online/on-air contests and giveaways throughout the campaign. Please contact Andy Gesner and the HIP Video Promo team at (732)-613-1779, email us at info@HIPVideoPromo.com or find Safaree on Twitter and Instagram for more info. For bookings/management contact bookings4safaree@gmail.com.