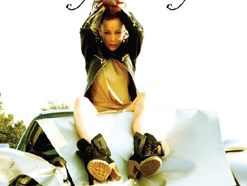 Greetings programming friends, it’s Andy Gesner and the staff from HIP Video Promo, here with a gutsy clip from an outspoken artist. The charming Sally Anthony may make irresistibly catchy, heartfelt pop records, but she’s got a developed political conscience, too, and seven years of Bush Administration callousness have raised her ire. Her latest single isn’t explicitly about the failure of American government; it could just as easily be understood as a tale of a relationship in peril. But the video for “So Long” makes her subtext – and her frustrations – clear. Destabilization in the Middle East, the cost in blood and treasure of endless war, federal negligence after Hurricane Katrina, the current home mortgage crisis, and the rising price of petrol: all of these are examined in the spot, and Anthony backs up her accusations with facts, disturbing pictures, and hard numbers. She flashes quotes and figures on the screen, incorporates unsettling footage from Iraq, and hangs the President with his own words. The resulting document is pointed, courageous, and telling; it’s difficult to dismiss, and impossible to ignore.

It’s a brave statement from a multifaceted artist who has never shied away from controversy. Though she’s still quite young, Sally Anthony is an entertainment industry veteran whose heart belongs to pop music, and her three albums have demonstrated her powerful, emotive voice, her skill at drawing identifiable female characters, and her knack for a clever sonic hook. “Goodbye”, the title tune from her latest set, is a representative number: it’s an independent woman’s kiss-off to a negligent boyfriend, and it’s spiked with an insidiously-delicious near-Eastern guitar riff. “So Long” isn’t quite as uptempo, but it’s no less radio-ready. As the latest single moves from its introspective verse to its explosive chorus, Sally Anthony’s performance intensifies; by the end of the song, she’s fully inhabited her heartbroken narrator. The singer has always had an enormous Internet following (check out her impressive mySpace stats), and lately, she’s translated that interest into legitimate commercial success. Goodbye reached #9 on the Billboard Heatseekers chart, reached #16 on the iTunes bestseller list, currently sits at #39 on the R&R Pop Charts and has moved more than 20,000 copies since its release. Anthony’s no studio hermit, either – her métier may be brightly-fashioned pop, but she’s shared stages with acts as disparate as James Taylor, Enrique Iglesias, and The Barenaked Ladies.

The “So Long” video opens with a blue sky – but from there, the clouds roll in. A thoughtful, somber Sally Anthony sings to herself as she walks alongside a military graveyard; footage of the President offering his now-familiar justifications for war are juxtaposed with heartbreaking images from the battlefront. Pictures of New Orleans after the 2005 floods are a grim reminder that Iraqis aren’t the only ones who’ve suffered over the past seven years. Suburban streets festooned with “for sale” signs advertise the downturn in our economic fortunes; as the value of American houses falls, close to one million of our countrymen are now homeless. Finally, Anthony reminds her audience that since the former oilmen Bush and Cheney have ascended to power, the price of gasoline has more than doubled. Unashamedly polemical and undeniably emotional, the “So Long” video is more than just an election-year intervention: it’s an impassioned cry from a bewildered and heartbroken American, asking her audience to help her take her country back.

We’re very psyched to be working with Tony Bucher and the whole Gracie Productions crew to bring you this bold new clip. They’ve been cool enough to hook us up with some copies of Goodbye for your on-air giveaway needs, so please drop us a line and let us know if you’d like get your hands on some. If you need more info, call Andy Gesner at 732-613-1779 or e-mail us at info@HIPVideoPromo.com.