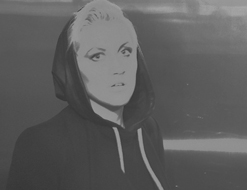 The video for Sarah Jaffe’s hypnotic “Lover Girl,” the latest single from Don’t Disconnect, opens with a shot of a tarantula in motion. It’s ominous, arresting, and oddly graceful, and it’s not exactly the sort of thing fans of Jaffe’s music might expect from her. But the North Texas singer-songwriter has made a career of confounding expectations — and creating intrigue. Since the release of her first recordings in 2008, Jaffe has never done the same thing twice. Her consistently enchanting music has incorporated elements of folk, avant-garde rock, electropop, jazz, and hip-hop. No matter how boldly Jaffe experiments — and she’s nothing if not bold — her music always bears her unmistakable sonic signature.

Don’t Disconnect, which NPR called “assured and ferociously intelligent,” is Jaffe’s most audacious departure from the pared-back folk-pop sound of her 2010 debut full-length Suburban Nature. Don’t Disconnect, a gleaming electronic pop set, feels as haunted and dream-drunk as a city street on a foggy night: textures shift, beats skitter, bass synthesizers throb, and Jaffe’s voice hovers over the  mixes, promising intimacy but always tantalizingly out of reach. Produced by McKenzie Smith of Midlake, Don’t Disconnect is the clearest expression yet of the gorgeous unease that has always been apparent in Jaffe’s songs. “Lover Girl”, an older Jaffe composition initially written as a folk-pop strummer, has been fitted with rhythm loops and analog synthesizers, and brought back to life as the brooding centerpiece of the new project. “Give me one more smile/Or I’ll steal it from your face,” purrs the singer on “Lover Girl”, tiptoeing on the fine line between romance and obsessive desire.

That sense of danger extends to the “Lover Girl” clip — a video that is simultaneously stylish and raw, and which presents Jaffe as a simultaneously alluring and disconcerting beauty. Directed by filmmaker and visual artist Jason M. Reimer, “Lover Girl” has the insouciant sex appeal of a fashion show and a David Lynch-esque dark noir feel to it. A hooded Jaffe receives a sinister assignment from a cult leader played by Jane Strimple, a former supermodel and fashion icon. With an impassive expression, Jaffe prowls a nightclub, luring a young man in black leather back to a penthouse -– and a terrible surprise. To heighten the drama, Reimer saturates the video with blood reds and icy blues, and sets Jaffe loose in a nighttime urban phantasmagoria that, nightmare though it is, shares some eerie similarities with contemporary clubland. The video, which Reimer says he concieved as “a treatment based on the children’s poem The Spider and the Fly mixed with Oscar Wilde’s Dorian Gray” is marvelously myterious clip with enough goodnees for your eyes and ears.

We would love to hook you up with whatever you may need Sarah Jaffe related, including copies of her new album, Don’t Disconnect, to get this video into programming so please don’t hesitate to be in touch. You can contact Andy Gesner and the HIP Video Promo at (732)-613-1779 or e-mail info@HIPVideoPromo.com. You can also visit www.SarahJaffe.com.