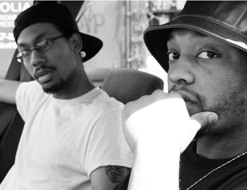 What’s up music fans! It’s Andy Gesner and the staff from HIP Video Promo, here with another outstanding clip from a talented two-man rap group with plenty to say. East St. Louis has earned its reputation as one of the poorest and most desperate cities in the United States; from coast to coast, its name is understood as a byword for urban danger and dysfunction. But there’s another side to East St. Louis, too: it’s been the birthplace of world-famous artists and entertainers, and it remains a site of artistic ferment. This is the city that gave Josephine Baker to the world; Duke Ellington sang of it; heralded poets and streetwise rappers write about its blighted neighborhoods and the uncommon resiliency of the people who call it home. On the darkly-compelling The New Noise, hip-hop duo Scripts ‘N Screwz bring East St. Louis to life in stark color – its gangs and its do-gooders, its crimes and its glories, its ugliness and its beauty alike. On tracks like “Big City Lights”, “The War Outside”, and the gripping “Addiction”, the two talented rappers prove themselves to be the best sort of tour guides: tough-minded, compassionate, grim but positive, attuned to local rhythms.

If it sounds like we’re describing a pair of remarkably thoughtful lyricists, that’s no accident: Scripts ‘N Screwz make the urban tales on The New Noise feel real and palpable. They’re uncompromising and hard-eyed, and they can speak frankly about the realities of inner-city life without ever falling into gangster-rap cliché. They’re deft on the microphone, too, drawing as much from the avant-rap of Outkast and the Dungeon Family as they do from the Southern sound so popular on contemporary rap radio. On “Brick”, their latest single, they trade verses with consummate skill; every boast is convincing, and every detail is vivid. Scripts ‘N Screwz are already recognized in their hometown as top-drawer emcees; wider recognition for their sharply-written and politically-aware tracks is inevitable.

But there’s a zany side to the duo, too, (their website, for instance, imagines that the group is orbiting Earth in a satellite, showing up on terra firma from time to time to play shows), and it’s on bold display in the animated clip for “Brick”. The Scripts ‘N Screwz video is reminiscent of an old Saturday morning cartoon: it’s got the same freewheeling, whimsical, anything-can-happen quality that made Hanna-Barbera Enterprises world-famous. That said, it’s decidedly set in E ast St. Louis – two hundred feet or so beneath the surface of the Mississippi River. What makes the animated avatars of Scripts and Screwz don scuba gear and dive to the bottom of the waterway? They’re chasing a couple of mermaids, of course. Beneath the waves, they encounter sunken treasure, man-eating fish, and the submerged castle of a not-too-friendly sea king. But by the end of the clip, everything has been put right: Scripts and Screwz are on the underwater microphones, the mermaids are playing guitar, a big fish is on the drums, and the regent himself stands in the middle of the stage, excitedly welcoming the rappers to his watery domain.

Working with Damon Davis and The V.E. Company, LLC to bring you the “Brick” video is a true thrill for us here at HIP! If you need more info, call Andy Gesner at 732-613-1779 or e-mail us at info@HIPVideoPromo.com .