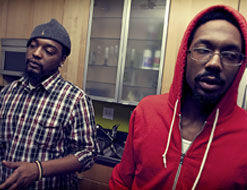 Hello programming bretheren, it’s Andy Gesner and the staff at HIP Video Promo with an unsurpassable new clip from the multi-faceted, multi-talented hip hop and rap duo Scripts N’ Screwz. Their latest entry, “On 10,” is an optimistic, yet gritty take on the East St. Louis lifestyle the duo so vividly represents. This clip is a brilliant mixture of rhythm, flow and attitude that allows it to float up the mainstream, without ever compromising substance for glamour.

Scripts N’ Screwz hail from the stark and gritty urban cityscape of East St. Louis. They have grown up with the challenges of being from one of the nation’s most dangerous city environments, yet never fell victim of its clichés. Their previous release The New Noise acted as a lyrical tour guide of the city and its inhabitants, but stayed away from the common and boring repetitiveness of gangster rap. Their fresh take on the genre catapulted the duo into CMJ and Top 20 Hip Hop charts across the country, as well as earning them features on MTV and A&E.

The group once again steps up to the plate with “On 10,” which is the lyrical equivalent of “cranking it to 11.” Hanging on to the notion, the duo pulls out all the stops with this beautifully shot video installment. The majority of the video takes place inside a red hallway that is painted to spin like a hypnotic spiral as the camera moves back and forth along its path. This unique painting style creates a spiral motion around our rapping heroes as they take center stage and attack the camera with their rhymes. However, the clip’s coolest effect is that as both Scripts and Screwz trade off verses and lines, they pop out from each other’s chests! Having such an unusual visual style speaks further of the innovative nature of this duo. While their peers take the much easier route of throwing in a few cars, girls, and drinks into a flashy clip, Scripts N’ Screwz never settle for the ordinary. The video also uses several black and white captures of each rapper walking the streets of their home city through a fish-eye lens, giving the clip a gritty side.

Just like the visual aspect of their presentation, Scripts N’ Screwz use music as a form of expressing individualism. What makes “On 10” so special is that the group takes a more optimistic approach to their craft, allowing themselves to forge a song about feeling on top of the world. Aware of the redundant dangers of writing a song like this, the duo treads carefully to avoid sounding like some of their less talented contemporaries, and place lyrics on a high level of importance. Another factor that makes this song so successful is how SNS trade off their verses, delivering a constant changeup of rhyme and flow styles within the track. Mix that in with some fuzzy and crunchy synth beats, and you’ve got yourself a monumental song on your hands!

“On 10” is the leading single from the brand new Scripts N’ Screwz EP album, The Hangover EP. The duo is currently allowing all of their fans to download the record for free from their website: ScriptsnScrewz.Bandcamp.com and we urge you to do so. This excellent EP is a precursor to the group’s upcoming full-length Smoke and Mirrors, due out via The VE Company later in 2011. The EP has already garnered blog buzz with Different Kitchen and RockTheDub raving about Scripts N’ Screwz. We couldn’t be more excited to bring you another Scripts N’ Screwz project! We’ve got lots of Scripts N’ Screwz stuff here for contests and giveaways, so don’t be shy about reaching out. If you need more info, call Andy Gesner at 732-613-1779 or e-mail us at info@HIPVideoPromo.com . You can also visit ScriptsnScrewz.Bandcamp.com to find out more about Scripts N’ Screwz.