Sharon Jones And The Dap-Kings “I Learned The Hard Way” 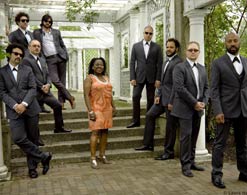 Howdy cherished programmers, it’s Andy Gesner and the HIP Video Promo team bringing you a nice slice of no frills, analog-loving goodness. If you’re looking for a group who has almost single-handedly mastered the essence of funk and soul music and achieved both critical and commercial success in the process, look no further than Sharon Jones & the Dap-Kings. In an age of digital recordings, backing tracks and studio tricks, this is a band that has established themselves in the most honest way, with an explosive live show and prolific output of gritty studio recordings. They’ve been delivering the goods for more than a decade and are continuing to carry out this goal with their latest video for “I Learned The Hard Way.”

As music veterans, Sharon Jones & the Dap-Kings know just how to visualize their soulful, emotionally charged tunes. In the case of “I Learned The Hard Way,” the group has followed suit in the rebirth of the making-music-videos-into-short-films trend. So much so that there are actually two versions of this video, with the director’s cut including a full minute and a half of Sharon Jones arguing with a man outside a bar as she tries to find her lover. The man declares, “Ain’t this a bitch” as the dramatic dialogue transitions to Sharon Jones alone in a desolate beach, reminiscing about the good times she’s had with her lover. The story unfolds as we see her lover going into the aforementioned bar, flirting with another girl. Amidst beautifully tinted close-ups of the Dap-Kings performing at the same bar, Sharon Jones sings about how blind she’s been about her relationship before ultimately proving to herself that her man is a two-timer.

Sharon Jones & the Dap-Kings are no strangers to translating this kind of raw emotion in their music. The nine-piece Brooklynite band is gritty yet refined, and Sharon Jones herself can belt it out just as hard as the soul divas who have come before her. When she sings, “I learned the hard way that your love was cruel,” you can almost feel the amount of pain she’s been put through as the Dap-Kings emphasize in the background just how far Sharon Jones has been screwed over.

It’s this kind of teamwork among Sharon Jones & the Dap-Kings that have earned them so many accolades throughout the years. To say that they are the critics darling would be an understatement. The group has appeared on every major late night show (The Colbert Report, Letterman, The Monique Show (BET), Craig Ferguson, Jimmy Fallon) have garnered attention from every major media outlets like MTV News, Entertainment Weekly, NPR, CBS Evening News and many many more, and was one of the two featured albums in all Starbucks stores for the month of April. They’ve also appeared at major festivals coast-to-coast, including Coachella, Bonnaroo, and Lollapalooza to name a few. Critics have long recognized this and we’re confident that with the group’s fourth album, also titled I Learned The Hard Way, having dropped just last month and already having sold over 60,000 copies, that Sharon Jones & the Dap-Kings will only further prove that they are definitely here to stay – and so is the soulful music that they spearhead 24/7.

Thanks a ton to the folks at Daptone Records for putting this video into our hands. We’d love to hook you up with the chance to catch up with the band for an interview when they come to your market. Or if you’d simply like a copy of the dazzling new album, drop us a line! If you need more info, call Andy Gesner at 732-613-1779 or e-mail us at info@HIPVideoPromo.com. You can also visit www.SharonJonesAndTheDapKings.com and www.DaptoneRecords.com to find out more about
Sharon Jones & the Dap-Kings.