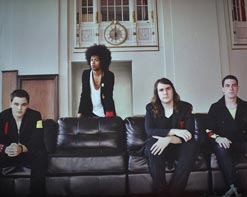 With an epic, soaring sound that reaches for the stars and takes hold, Softsilence is a band that seems destined for greatness. Having opened for big-name acts like Stone Temple Pilots and Hoobastank, this Southern California four-piece began building buzz early and eventually signed a publishing deal with Young Guns Publishing that relocated the band to Nashville, TN, in 2013. Now, after carefully refining and elevating their widescreen take on alt-rock, we are on the verge of their debut release–the Like A King EP. HIP Video Promo is happy to present the energetic and emotional clip for the title track, “Like A King.”

Beginning with the sound of lightly hammered piano keys, the song quickly establishes a somber and passionate tension as the band kicks into gear. Over a heavy beat and a twisting bassline, charismatic frontman Bryan Dixon contemplates the void left behind in the wake of a shattered romance, singing “Where’s the high horse that we rode in? / Could’ve lived like a king, but it ended.” The grit and soul in his voice carries an honesty that pulls you into the drama. “Like A King” is that rare type of song that ramps up the energy so high in its pre-chorus, the chorus itself hits like a completely unexpected display of fireworks, hitting a triumphantly hopeful note despite the feeling of loss at its core.

The video–directed by Carl Ball–follows Dixon as he climbs the stairs of a stately mansion and sits at an empty banquet table. He flashes back to a time when he was surrounded by his friends and the woman he loved, raising full cups to a future that wasn’t meant to be. His lover rises, kisses him softly, and leaves the party. Now, he sings the song into the emptiness, defiant and determined to carry on somehow. The clip intersperses high-energy shots of the band performing to a packed house, arms waving and hands clapping in time. At the video’s end, Dixon walks out of the empty room with a heavy heart, as we see a shot of a candle still burning on the table.

For more information about this exciting new band and their video, please contact Andy Gesner and the HIP Video Promo staff at (732) 613-1779 or e-mail info@HIPVideoPromo.com . You can also visit www.Facebook.com/SoftsilenceOfficial/ for more info.