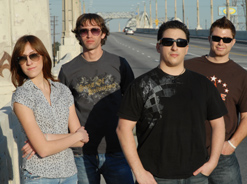 Howdy rock fanatics! It’s Andy Gesner and the staff from HIP Video Promo, back to spread the word of a collaboration between a favorite video director of ours and one of the hottest bands on the East Coast. Scott Culver has made memorable promo clips for Yellowcard, Halifax, The Early November, hellogoodbye and many other popular contemporary bands, and it’s often been our pleasure to share these videos with you. Culver makes the rock groups he works with look fantastic: iconic and inevitable, shooting stars in mid-trajectory. He’s particularly adept at pairing great on-camera performances with striking, evocative imagery. Now, the veteran director has turned his talents to Soundside – and he couldn’t have found a more appropriate canvas for his work.

For starters, Soundside shares more than just an approach with the bands Culver has worked with before – they’ve shared stages, too. The L.I. quartet (besides being a great band name, “soundside” is local slang for the northern half of the island) has played everywhere from the Knitting Factory in New York to the Carrier Dome in Syracuse. Their explosive live set has made them a substantial draw on the Northeastern club circuit, and they’ll soon be bringing their sound to the rest of the country: the release of Seconds From Sunrise, their newest album, will be accompanied by a tour and a nationwide radio campaign. Singer Rich Arcati’s backstory is one of the most notable in modern rock – he’s half-Mexican and a fluent Spanish speaker, and his growing discography features an EP of Soundside canciones en Espanol. Clearly this is a band making a conscientious effort to reach as wide an audience as possible – and one with the tools and talent to do so.

Produced by Angus Cooke of The Ataris, Seconds From Sunrise is a collection of muscular, arena-ready, and immediately winning modern rock songs. It’s unabashedly eclectic, too: Soundside’s music is just as forceful with acoustic instruments as they are with their amps cranked, and folk, prog, and reggae(!) influences can be felt in these grooves. But the predominant sound here is both heavy and melodic, and “Loss For Words” epitomizes that approach. The song builds from an angular guitar riff to an anthemic chorus, and Arcati delivers his story with passion, power, and tremendous conviction.

Culver’s Little Prince-inspired clip for “Loss For Words” finds Soundside in stratospheric territory – quite literally! They’re playing on a small asteroid hurtling through space; as the stars and planets hurtle through space behind them, the curvature of their sphere is evident. But there are even smaller orbs in this firmament, and they’re inhabited – one, grassy and fertile, by a little girl celebrating her birthday, and another, barren and smoking, by a young boy with a telescope. They’re alone, and lonely; separated by an interstellar gulf. The boy has a net sturdy enough to catch a comet, though – and once he’s got one, he rides it through the blackness to meet her on her planet.

We’re thrilled to have the opportunity to work together with Jimmy Cantillon and the rest of the Soundside and Mystery Sound Records teams to bring you this terrific video. They have hooked us up with plenty of copies of Seconds From Sunrise for your on-air giveaway needs so drop us a line to get your hands on some. If you need more info, call Andy Gesner at 732-613-1779 or e-mail us at info@HIPVideoPromo.com.