South “You Are One” 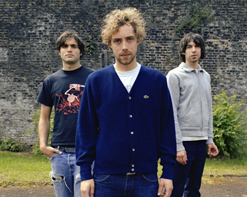 Greetings to all of my cohorts in music video land! It’s Andy Gesner and the staff from HIP Video Promo, back with another clip that’s bound to elevate the profile of a worthy independent rock act. We respect groups like South: bands that don’t worry about genre expectations, and instead concentrate on refining their songwriting and musicianship. Since the beginning of this decade, the British trio has been one of the most consistently interesting – and unclassifiable – indie combos on either side of the Atlantic. They’re sure hands with synthesized textures, and they’re excellent electric guitarists, too; they can craft a techno symphony and turn around and stomp out an undeniable rocker. Whatever they’re doing, of this you can be sure: the melodies will be infectious, the harmonies will be dazzling, the accompaniment will be impeccably-played, and the production will be full, rich, and instantly absorbing.

Adventures In The Underground Journey To The Stars, the latest album from South (and their first for Young American Recordings), is well titled: it really does feel like a trip across the stratosphere. That said, it feels more organic and welcoming than any of their prior sets ever did. The skillful programming is still here – but the emphasis onAdventures is on tight, succinct guitar-based modern rock. Tracks twist and melt into each other, and artful bridging sections frame the cuts, but at the core of each song is a simple, undeniable, well-executed melodic idea. South is rocking harder – and freer – than they ever have before, too. Singer and bassist Joel Cadbury’s voice can float elegantly atop the blissed-out mixes, but when necessary, he proves he can shout out an indie rock lead vocal as well as any Britpop frontman.

“You Are One” is one of the rockers: a storm of guitar, bass, and pounding snare, energetic, expansive, and propulsive. The song speeds up and slows down at unexpected moments, and slides effortlessly through a dream-drunk verse before sprinting through a dazzling chorus. As is always true about music made by South, the mix sounds fantastic – it’s a whirlpool of a track, filled with dangerous crosscurrents and eddies, and drawing listeners deeper into its dark center. “If South should somehow get bored of the band concept, they could easily launch a second career producing other bands’ albums”, raves David Goldstein of Cokemachineglow. The instruments are so pleasing to the ear, reports the critic, that “you’d think they’d been sprinkled with pixie dust.”

The “You Are One” clip amplifies the gauzy, dizzy and slightly destabilized feel of South’s production on Adventures In The Underground Journey To The Stars. It would be misleading to call it psychedelic, but it does put the band – and the viewer – through a resolutely altered state. The entire clip is shot through a distorted lens that warps the faces and bodies of the bandmembers: the closer they get to the center of the screen, the smaller they look. As the musicians address the camera, their heads shrink, disappear altogether, bend and twist, and pull apart like taffy. But this isn’t the only effect employed: instead of fluid motion, the video consists of quick, herky-jerky cuts. So “You Are One” leaps from one warped image to the next – instead of flowing toward the corners like oil pressed under glass, the members of South appear to stretch mechanically, their bodies slanting unnaturally to the corners of the screen. Because each frame was shot separately, objects appear to be floating in space, too. In one memorable sequence, an array of guitars and electric basses hang in the air. Guitarist Jamie McDonald moves along the row as if he’s on a conveyor belt, fingering each fretboard in turn, taking a continuous solo on ten different instruments.

We are ecstatic to be partnering up with superbly talented Young American Recordings team for the first time, delivering a South video that is sure to catch your viewers’ attention. Don’t miss out on your chance to show your support of the “You Are One” video! We have lots of copies of Adventures In The Underground Journey To The Stars so let us know if you’d like to get your hands on some! If you need more info call Andy Gesner at 732-613-1779, or email info@hipvideopromo.com.