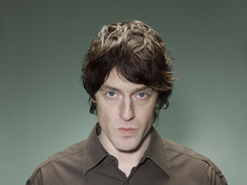 Howdy friends! It’s Andy Gesner and the staff from HIP Video Promo, here with a remarkable comeback clip from one of rock music’s most powerful and prophetic artists. It’s been five years since we last heard from Jason “Spaceman” Pierce, the electrifying, tormented, and otherworldly frontman of Spiritualized – and given the troubling subject matter of his songs, many of us had suspected the worst. Turns out that dark speculation wasn’t too far from the truth: Pierce spent much of 2005 in the emergency room, trapped in a life-and-death battle with cranial infection and double pneumonia. The singer-slash-composer won the ultimate prizefight, and he’s back with a new set of tales heavily informed by his protracted encounter with his own vexed mortality. Surely it’s not right to find utility in the misfortune of others, but if we could pick one artist to journey to the lip of death and report on what he’d seen there, Jason Pierce would be the one.

That’s because nobody sings about transcendence and altered states with more authority than Pierce does. His albums with Spiritualized are modern classics not merely because of their bold experimentation, mind-altering phasing effects, and monumental sound – they’re also invariably personal, painfully honest, and deeply human. Those who’ve called Spiritualized a “drug” band have always missed the point (even while reveling in the group’s unparalleled trippiness): Pierce’s music takes the listener on a voyage beyond the limits of his own quotidian consciousness. Love, sex, religion, and pharmaceuticals are, in the hands of the writer, all metaphors – methods for attaining spiritual freedom. And freedom, as Pierce informs us in “Soul On Fire”, is just another word for when you have no one left to hurt.

In interviews, Pierce promised that Songs in A&E would be the work of the Devil, and judging by the sound of “Soul On Fire”, he’s managed to capture the Archfiend in all of his diabolical glory. The “A&E” of the title aren’t just musical keys – they also refer to the accident and emergency ward in which the singer was confined. In his cracked, conversational, and hypnotic voice, Pierce sings of a hurricane blowing through his veins: he’s been to the edge, and his performance bears all the hallmarks of terrifying lived experience. Ironically, Spiritualized has never sounded any more glorious than they do here – their unprecedented and vigorous fusion of Brit-pop, space-rock, gospel, old-fashioned R&B, country, blues, and art-psych remains wholly intact here, lurid, radiant, pulsating in vibrant color.

As anybody who has ever spun Ladies And Gentlemen We Are Floating In Space or Let It Come Down can testify to, Spiritualized’s music often feels like a force of nature. Consequently, the bar is set high for any Spiritualized video: it must capture some of the crazed grandeur of Pierce’s signature sound. We’re thrilled to say that the “Soul On Fire” clip rises to the challenge – it’s as breathtakingly beautiful as it is harrowing. The video finds Pierce at rest on a frozen Icelandic landscape, cheek pressed against the glacier as he sings. Wind whips a froth of snow from rocky crags behind him, and the northern lights dance in the sky overhead. Still shots of syringes and medical equipment strongly suggest that Pierce is, in fact, confined to a hospital bed, and that this dizzying vista is, in fact, his internal landscape.

Big thanks to Andy Valdez and the folks at Tsunami Entertainment for allowing us the pleasure of being a part of the Spiritualized team. They’ve been rad enough to hook us up with plenty of copies of Songs in A&E for your on-air giveaway needs, so drop us a line to get your hands on some! If you need more info call Andy Gesner at 732-613-1779, or email info@HIPVideoPromo.com. You can also visit www.Spiritualized.com to find out more about Spiritualized.