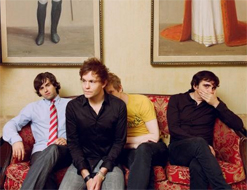 Greetings, everyone — it’s Andy Gesner and the staff from HIP Video Promo, here to share one of the most anticipated videos of the new year. “Written In Reverse”, the first clip from the latest Spoon album, is superficially similar to the lead video from the band’s last set. Just as they did in the clip for “The Underdog”, the members of Spoon gather around microphones in a recording studio and let the magic happen.

But while the studio vibe in the spot for “The Underdog” was relaxed and whimsical, the “Written In Reverse” session is intense and electrifying. If Britt Daniel seemed completely in command during his performance of “The Underdog”, here, cracks in his famous composure are intriguingly apparent. “The Underdog” clip took us inside the studio’s control room; the hallways around the live room; isolation booths; side chambers; even outside: filled with friends and associates, it looked like a comfortable place to inhabit. In the “Written In Reverse” clip, the camera stays in the chilly-looking performance area; the “crowd”, upon closer examination, turns out to be mirror images of the band members. The clip is shot in high-contrast black and white; like an interrogation suspect, Daniel is illuminated from above. An article accompanying an Exclusive First Listen on NPR discussed “the unshakable sense that something darker or more mysterious is lurking beneath the glittering riffs and poppy beats” of Spoon’s music. The “Written In Reverse” clip makes that sense of mystery manifest for viewers. And perhaps the most compelling aspect of all is that the audio you hear is actually a live performance by the band that can only be distinguished by listening side by side to the album version.

Is it a sign of things to come? We’ll know shortly with Transference being officially released on January 19th. But it’s a pretty safe bet that it’ll be a landmark recording, because Spoon makes nothing but new pop classics. Gimme Fiction, Girls Can Tell, Kill The Moonlight, A Series Of Sneaks — these and others are now recognized as chapters in a story of precision, innovation, and sustained excellence. Ga Ga Ga Ga Ga, Spoon’s ’07 album, topped too many Best-Of lists to count, and introduced thousands of new listeners to Britt Daniel’s brilliant, poised, and economical songwriting. And critics lucky enough to have gotten advance copies are already raving about “Written In Reverse”: Stereogum insists it “hits all the Spoon-y sweet spots”, and Pitchfork marvels at the track’s “screw-loose vibe” and Daniel’s impassioned performance. It’s a gripping piano and guitar groove with a big, insistent beat, and a fiery, shredded-throat lead vocal from a frontman with the imagination — and the voice — to realize all of his ambitions.

Britt Daniel affixes a pop screen to the hanging microphone at the very beginning of the “Written In Reverse” video, and it’s a wise decision: the Spoon frontman spends the next four minutes going at it as hard as he can. The mirrors in the room play tricks on the viewer’s eyes — sometimes we’re watching Daniel, sometimes we’re watching his reflection, and sometimes it’s impossible to tell which is which. The live room feels loaded with dangerous angles and funny sights; light reflecting off of a cymbal (or is it a mirrored image of a cymbal?) casts ghostly illumination on the drummer’s face Yet somehow we never catch a glimpse or reflection of any cameras, cameramen, or anything to indicate that the room is inhabited by anyone but the band. It all ends abruptly, chillingly, affectingly, as a disembodied voice talks back to the band, and Daniel, exhausted, retreats from the frame.

It’s a huge pleasure for us to have the opportunity to work once again with the good folks at Merge Records to bring you this fantastic video. If you need more info, call Andy Gesner at 732-613-1779 or e-mail us at info@HIPVideoPromo.com. You can also visit www.MergeRecords.com or www.SpoonTheBand.com to find out more about Spoon.

For info about Spoon’s previous video, “The Underdog” click HERE