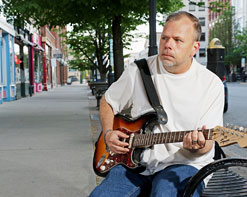 Sven Sundberg is a uniquely special talent. Using a solid belief that simplicity is the hallmark of a great melody, he is consistently creating ambient, electronic instrumental pop music that finds inspiration straight from the heart. While many artists rely heavily on lyrics to express themselves, Sven’s use of simple, emotive melodies have found him connecting with a vast audience. His new video for “If Only,” featuring Sven starring opposite professional actor Byron Jordan Wolter, uses not just the music but a love story to tug at the heart strings and remind viewers to never miss the chance to follow their hearts.  The song features British artist Charlie Dryden on guitar.

Many artists will talk about following their dreams and almost losing everything, but Sven Sundberg has lived it much more than most. Though music was a part of his life at a young age, it just never took hold how he wanted. His professional life was going well and he was climbing the professional ladder until one day it happened… Cancer.

Only in his 30’s, Sven was devastated but determined. He vowed that once he was cured he would reinvest himself in his music wholeheartedly. Fast forward 11 albums, licensing successes, several awards and a million other musical experiences later and Sven is the living, breathing epitome of never giving up on one’s dreams.

The “If Only” video, dedicated to Sven’s late mother Dorothy, is a touching, loving piece of cinema. It begins innocently enough with Sven entering a cafe with friends and making eye contact with Byron across the way. As the two trade glances from across the room an imaginary future together is played out. From the early moments and first hand holds and kisses all the way through exchanging vows and living happily ever after, this future is a beautiful glimpse of not just a fairy tale life, but also a celebration of marriage equality. Love is the purest emotion in the world, and the right to share it with another person is one that cannot ever be denied.

We are incredibly excited to be working with Sven Sundberg to help spread the word about not only his infectious, emotionally immersive music, but also the cause he is championing in the “If Only” video. It’s our great hope that you will include this video in your programming and we are here to do what we can to make that happen. Please contact Andy Gesner and the HIP Video Promo team at (732)-613-1779, email us at info@HIPVideoPromo.com. You can also visit www.SvenSundberg.com for more info on Sven Sundberg.