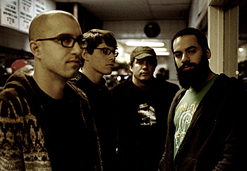 Greetings music fans! It’s Andy Gesner and the staff from HIP Video Promo, here with a new clip from a Toronto band on the brink of explosion into the indie world. Although the Ten Kens has only released their self-titled debut album in September, the band is already gathering fans around the globe. The reason? Ten Kens create fuzzy, noisy tracks held together by engaging, rough-and-tumble guitar beats. Beats that stick hooks in your brain and don’t let you go. Ten Kens also emphasizes their trademark sound by not filtering and not refining. They keep it lo-fi, natural, pure noisy rock that is both artsy and non-pretentious at the same time. Ten Kens take their cue from the art-rock of the nineties—from notable acts like Sonic Youth, who use a swirling, gritty guitar, and vocals are at times spacey and far-away, and at times harsh and biting.

The band’s debut is expectedly getting some good ink. Classic Rockmagazine calls the music of Ten Kens “thoroughly engaging and distinctive stuff that brims with freshness and cracked ingenuity.” Ten Kens is indeed fresh stuff—they defy genre labels and sometimes confound the Canadian music scene. In an Earz Magazine interview, they said they get a lot of blank stares. But although that reaction might make some people hop off the tour van, the Ten Kens say they enjoy being that band—the one that refuses categorization. .

Although they most often cite the indie bands of the nineties as influences, the track “Spanish Fly” includes noises straight off a prog rock album. Heavy guitar—with a notable flamenco flavor—drives the song, while the vocals seethe in the background. “Spanish Fly” could be called an artsy headbanger.

The “Spanish Fly” video looks a lot like the music sounds— by taking something expected and pulling it into an unexpected direction. Created by fellow band The Black Belt Kids, it depicts an animated bullfighting ring complete an audience cheering and jeering. But, unexpectedly, there are no bulls. Instead, the matador, an evil-looking villain with a smirk on his face, is waving his red flag at a sleek, black four wheel muscle car. A tough woman with fishnet stockings and a cigarette hanging out of her mouth drives this beast. She’s trying to run over the matador, but this is one skilled fighter and her best attempts are repeatedly met with frustration and near misses. Unfortunately for him, the determined driver looks like she might just have the final ace up her sleeve…

Big thanks to Anna Bond and Adam Pierce from Fat Cat Records for bringing a this little bit of hot rod action into our lives! Drop us a note if there is anything Ten Kens related we can help you out with, and we’ll make it happen! If you need more info, call Andy Gesner at 732-613-1779 or e-mail us at info@HIPVideoPromo.com. You can also visit www.FatCat-USA.com or www.TenKens.com for more info.