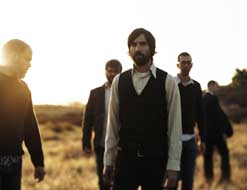 Every frame in Matthew Brown’s video for “There Is A Wind” sparkles with color and life. Every object seems to be illuminated from within and animated by a primeval force. When Brown slows down the footage, the entire world seems to pulse with a strange, mystical energy. He’s out to capture the wind — as a phenomenon, as a metaphor, as a visual effect, and as an invisible engine of natural beauty. That he’s managed to do just that isn’t even the greatest wonder here: it’s that Brown’s vision complements the soft, expansive, radiant sound of The Album Leaf so perfectly.

Matthew Brown had a tough act to follow. The Album Leaf is known for pairing their atmospheric, quietly-progressive songs with stunning music videos. Their clip for “On Your Way” populated a forest glade with a society of cartoon characters, and became one of the best-loved underground spots of 2006. The “Always For You” video was a fractured, haunting chronicle of separation, memory, and long-distance romance. “There Is A Wind” is a worthy follow-up — it’s six minutes of pure filmed magic, and a dazzling accompaniment to one of the band’s most ambitious tracks yet.

And yes, they are a band. While prior albums were almost completely made by Jimmy LaValle, the latest set — A Chorus Of Storytellers — was recorded and performed by the live iteration of The Album Leaf. What’s been gained: a newfound clarity and sense of dynamics, heightened drama, and a more intimate feel. LaValle hasn’t sacrificed any of the innovative electronic elements that have made prior Album Leaf releases so engrossing — he’s just integrated them seamlessly into the band’s sound. “There Is A Wind” is a good example of The Album Leaf at their most glorious: the guitars twinkle, synthesizer patterns wind sinuously, the vocals are muted and enveloping, and the melodies curl and float up toward the ceiling like smoke. The song shares many qualities with its subject — like the wind itself, the band’s music feels like a timeless force.

But the wind isn’t the only force in Matthew Brown’s clip. Humans are imposing their wills on the natural environment, too, and as gentle as they are, they’re still formidable. This is dramatized early: we watch an insect adjust its trajectory in a stiff breeze, only to be brushed off of a picnic table by a young woman setting up a birthday party (the bug is fine; we later see it crawling, unperturbed, from the window of a Matchbox car). The streamers are taken by the wind, too; they shudder and ripple and aren’t easily tamed. Birds, scarves, balloons, treetops, model planes; all of these and more are influenced by the breeze. But the wind doesn’t really pick up until the end of the clip, when, after a short pause in the music, the top of the party table is whipped by a gale. The partygoers are alert, awed, terrified, amused; they stand in wonder at the power of the natural world.

We’re very appreciative of the folks at Sub Pop allowing us to be a part of The Album Leaf team and we are here to set you up with whatever you need. If you need more info, call Andy Gesner at 732-613-1779 or e-mail us at info@HIPVideoPromo.com. You can also www.SubPop.com or www.TheAlbumLeaf.com to find out more about The Album Leaf.

For info about The Album Leaf’s previous video, “On Your Way” click HERE.