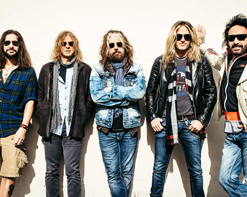 Riveting Hard Rockers The Dead Daisies have just dropped their captivating new single “Song And A Prayer,” just prior to kicking off their massive six-week joint-headline UK and European Tour with The Answer.

A short film, reflecting the poignant story behind the lyrics of “Song And A Prayer,” the fourth single to be taken from The Dead Daisies’ much acclaimed new album Make Some Noise, which crashed into the Top 40 National UK album chart in August departs from the heartracing live clips that have become the Daisies’ signature look. Like their debut single for “Lock and Load,” they have created a thought provoking story-led video that strikes an emotional power chord.

Says John Corabi: “This song turned out to have a special vibe to it, very accessible, which is really cool. But the lyrics are rather dark. In the end it’s about hope, it talks about all the troubles we’re all going through – and that you have to be hopeful, that you will come out of it. Always look on the positive side, that’s the message.”

The video follows the paths of a young man and woman, each one haunted by a past they would rather forget. The looks in their eyes show the pain they’ve each experienced. Him through the battlefield and her through the streets and things she had to do to get by. Somehow they each find the strength to move forward and in the end are able to find the peace they crave in each other’s presence.

The Dead Daisies, who were recently special guests on KISS’ entire ‘Freedom To Rock’ US tour, have just played their first ever USO headline tour for Servicemen and –women in South Korea. They are also celebrating the release of “Song And A Prayer” by embarking on 5 nights at sea as special guests on KISS Kruise V! Get in touch with Andy Gesner and the HIP Video Promo team at (732)-613-1779, email us at info@HIPVideoPromo.com . You can also visit www.TheDeadDaisies.com for more info on The Dead Daisies.