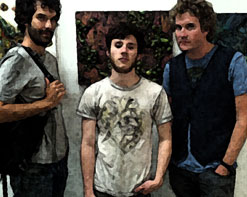 The Gardes is a music group that continually reinvents itself, whether it’s on purpose or not, founded by Brett Horton and longtime collaborator Aaron Siemers. The group in its history has had a regular line-up at times and also used a revolving line-up. Since its conception in 2002, they have played many shows and released many independently produced albums via their own music label, Willie Cry Records.

For their new video “All In The Week,” the band presents us with one of the best examples of their sound, which Groopease described as “a brilliantly simple collection of sounds that cross lines between the Pixies, Nirvana and even the Black Keys.” The band, which describes themselves as a “folking rock band that mixes up the genre soup,” has been making waves in the Oklahoma area (and more recently Portland, OR) for years now, and have methodically built up their fanbase not just in the Midwest, but from locations far and wide in the USA and abroad.

“All In The Week” is simultaneously soothing and chaotic. The backbeat of the song, with it’s arpeggiated guitars and washy ride cymbal atmosphere, combined with a relaxing baritone vocal creates an atmosphere that eases through the song at a deliberate pace. The vocal trade off between Horton and Siemers creates a unique dynamic and keeps the listener on their toes.

Juxtaposed with this calm vibe is a tense, frantic music video that perfectly captures the frustrations of the daily grind to and from what turns out to be a rather unorthodox office. From the opening frames it’s apparent that this day is not getting off to a good start for our protagonist (guitarist Aaron Siemers.) He rises out of his slumber and so begins the process of getting the suit and tie on, catching the mass transit, and generally racing across the clock.

It’s our true pleasure to help uncover this indie rock gem for you and your viewers and we sincerely hope that you will opt to support them in your upcoming programming. If there is anything we can do on our end to help make that happen, please don’t hesitate one bit to let us know! Please contact Andy Gesner and the HIP Video Promo team at (732)-613-1779 or email info@HIPVideoPromo.com . You can also visit http://www.Facebook.com/thegardes/ for more info.