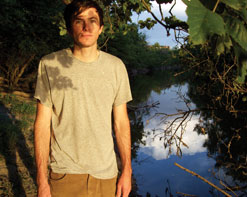 Chris Otepka is the lead singer for the Bellingham-based indie rock band The Heligoats, a project that he’s been working on for over ten years now. With comparisons to modern day artists such as Fleet Foxes, Neutral Milk Hotel, and Conor Oberst’s Bright Eyes, The Heligoats have a very quirky and imaginative way of expressing their creative energy. HIP Video Promo presents their newest video clip “Drai Zich,” which shows the band in their most playful light.

The Heligoats was Chris’ first songwriting outlet, and he wrote his first pieces in 1998 before eventually forming Chicago-based Troubled Hubble, a successful touring band that took up much of his musical energy from 1999-2005. During downtime in Troubled Hubble’s career, Chris Otepka would still write songs for The Heligoats, but most of which can be found on various Heligoats recordings. After Troubled Hubble performed their last show, Otepka began working on The Heligoats’ six-song album titled The End of All Purpose, which took a few years to record, listen, and re-mix, but was eventually released on Greyday Productions in 2008.

The Heligoats’ 2009 release of their second album Goodness Gracious received much critical acclaim, and their third album Live Free & Let Loose offered fans the downright eclectic and masterful eccentricities of singer/songwriter Chris Otepka. Known for his incredible need for perfection, the records have proved to be enlightening and noteworthy. The Heligoats’ newest album Back to the Ache on Greyday Records once again includes the most-loved eccentricity that makes up this quirky band’s characteristics. After the single “Tofutti’s” most recent premier on NPR, the new album is gaining high praise. From Back to the Ache, The Heligoats deliver a sense of playfulness and cheerful energy in their newest video “Drai Zich.”

Set on a field of grass, “Drai Zich” includes scenes of a memorable childhood game called Red Rover. The black and white scenes add a contagious ambiance to the characteristics of this alternative/indie rock band, and portray the happiness that exists within holding on to childhood memories. The song itself is a catchy tune, emanating the raw elements that make up the profound music of The Heligoats. As this mini film is reminiscent of childhood experience, it also shines a light on the happiness that exists within leading a good life. “Drai Zich” enforces the importance of being surrounded by friends and lovers, and shows The Heligoats as a raw and natural force of nature.

Since the very first introduction of The Heligoats’ music in 2008, they have been producing tracks that include very unique sounds. “Drai Zich” captures the essence that makes up this powerfully creative band. With a tour already set in motion, The Heligoats are popping up everywhere, so be sure not to miss out on the eclectic performances of Chris Otepka’s inspiring band. If you need more info, call Andy Gesner at 732-613-1779 or e-mail us at info@HIPVideoPromo.com . You can also visit www.TheHeligoats.com.