The Kooks “Always Where I Need To Be” 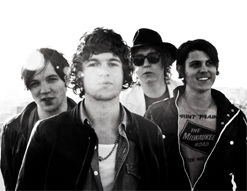 Artist:
THE KOOKS
Label:
ASTRALWERKS
Video:
“ALWAYS WHERE I NEED TO BE”
Director:
The Malloys
Add Date:
March 24, 2008

Hello programming friends! It’s Andy Gesner and the staff from HIP Video Promo, very excited to bring you this hotly anticipated new clip. Here at HIP, we like nothing better than to see a dedicated client rise to international prominence. It was our great honor to be able to spread the word about The Kooks’s first U.S. video, and we’ve been there for all the band’s subsequent singles. We’ve watched the Brit-rock quartet become worldwide superstars, hitting the charts in three different continents, placing six singles in the British Top 40, and selling two million copies of Inside In/Inside Out, their blistering debut. The set achieved quadruple-platinum status in the U.K.; more tellingly, the band became a cultural phenomenon, and their songs became the soundtracks to the lives of countless young Britons

Today, it’s a thrill to be present at the beginning of a new chapter.Konk, the follow-up to Inside In/Inside Out, drops this April – and you’d probably have to go back to the heyday of Oasis to find the U.K. in the throes of such pre-release hysteria. In the States, anticipation has been considerable, too; the Brighton quartet might not be celebrities here as they are back home (yet), but Inside In/Inside Out made The Kooks favorites among fans of modern rock. Many enterprising Americans can already sing back the latest recordings: the band previewed cuts from the upcoming album at a series of sold-out shows in Los Angeles and New York, If the ecstatic reception at those gigs is any indication of future sales, the U.S.Billboard charts will soon be Kooks territory, too

Konk, named for the Ray Davies-owned studio where it was recorded, is bigger, brighter, more tuneful, and more ambitious than the first album, and it seems destined to join Inside In/Inside Out in the ranks of undisputed Brit-rock classics. “Always Where I Need To Be”, the teaser single from the Tony Hoffer-produced follow-up, gives listeners an idea of exactly where the band has headed. Turns out they’ve derived more than just studio time from Ray Davies: in its faith in the power of the distorted guitar-riff and the rough-but-sweet lead vocal, “Always Where I Need To Be” evokes Sixties-era Kinks. Singer Luke Pritchard’s protean talent is a thing of renown in Britain, and it’s on bold display here: he sounds simultaneously gutty and tender, arch and approachable, tuneful and tough.

The camera loves him, too. He shines in Brendan Molloy’s sly, casual, delightful clip for “Always Where I Need To Be”, dancing before the microphone in a sun-lit Brooklyn practice studio. You’ll remember that The Kooks video for “She Moves In Her Own Way” (U.K. Top 10) caught the band in action as they traveled through the streets of Mexico; the lead clip fromKonk is based on a similar concept, but New York City is the territory the band is exploring. They roam through Manhattan streets, play atop a Kingsborough warehouse, and even indulge in a quintessentially Gothamite activity – attending a casting call. The clip has a gentle, hand-held quality that draws the viewer closer to the group; it’s a concession to the intimacy that Kooks fans worldwide want with their heroes. What’s more, it’s the kind of clip guaranteed to win over the unconverted: if you weren’t pulling for the Kooks before now, you surely will after watching “Always Where I Need To Be”.

We have also been eagerly awaiting this new clip, and we’re very excited to be working together with Risa Morley and the folks at Astralwerks to bring it to you and your viewers. The band will be touring the US later this Spring, so please keep your eyes peeled and let us know if you’d like to set up a video interview when they come through your market. If you need more info, call Andy Gesner at 732-613-1779 or e-mail us at info@HIPVideoPromo.com. You can also visit www.Astralwerks.com, or www.TheKooks.co.uk to find out more about The Kooks.

For info about The Kooks’ previous video, “Naive” click HERE

For info about The Kooks’ previous video, “She Moves In Her Own Way” click HERE