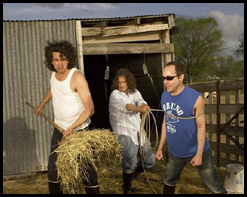 Hello to all of my indie rock kindred spirits! It’s Andy Gesner and the staff from HIP Video Promo, and today, we’re thrilled to bring you the latest clip from one of the indispensable alternative-rock bands of the last three decades. The Meat Puppets are many things – Arizona music legends, stylistic pioneers who broadened the possibilities of punk, acknowledged favorites of Kurt Cobain, and formidable concert performers. But above all, Curt and Cris Kirkwood have always been ace songwriters, and no history of American independent music is complete without a chapter on the Puppets’ influence on grunge, weirdo folk-rock, neo-psychedelia, and twisted punk. Consider this: The Meat Puppets were among the few underground Eighties favorites who did not compromise their sound or approach at all when they moved to a major label and widespread acceptance in the Nineties. They didn’t have to: the music world had come to them.

Rise To Your Knees, the latest album from the seminal trio, reunites the Kirkwood brothers after a decade apart and finds the pair recapturing the spontaneous magic of their early recordings. Rise may sound as warm and accessible as their ’94 hit Too High To Die, but the courageous songwriting here echoes the classics Meat Puppets IIand Up On The Sun. Those were the albums that gave shape to the “cowpunk” movement – which has since splintered into a dozen subgenres all deeply indebted to The Meat Puppets – and spawned countless imitators. They also established Curt Kirkwood as one of the legitimate guitar originals of the period, and functioned as a showcase for his unconventional skills. The elder Kirkwood lets it rip on Rise To Your Knees, tearing into tracks like “Light The Fire” and “Vultures” with renewed energy and purpose.

“On The Rise”, on the other hand, is a reflective track – the Puppets at their semi-acoustic best. Over a loose but propulsive beat by drummer Ted Marcus, Kirkwood sings sardonically about consumer culture and the illusory empowerment it offers. Both Kirkwood brothers have always had terrific senses of humor; here, they’ve turned their wit against the shopping-mall consciousness to great effect. But there’s also something very sad about the track, and it’s that ambivalence that director Roboshobo (Mates Of State, Blood Brothers, Hot Hot Heat) explores in his brilliant animated video.

The “On The Rise” clip follows the travels of a circus performer and human cannonball whose desire to shoot for the stars – and the lovely woman hanging out on the moon – is his spectacular undoing. He sees her before her star-scaling act, and she captures his heart; later, as he attempts to make himself presentable in his trailer, he calculates his usual distance and realizes he’ll never achieve escape velocity. Luckily (or unluckily?), the devil is listening, and in exchange for his soul, the human cannonball is given the ability to soar past the planets. His accuracy, however, leaves something to be desired: as his dream girl in the lunar crescent reaches out to him, he streaks right past her, and into a terrifying monkey’s mouth waiting in the heavens. Roboshobo (the pen-name of the talented Robert Shober) fills his palette with cool blues and deep blacks, and maintains a deliciously somber tone throughout. Even the elephants in the sideshow look penned in, doomed, dream-haunted. Every frame points toward the tragic conclusion, and when it comes, it’s every bit as heartbreaking – and amusing – as the Kirkwoods’ infectious song.

It is a true honor and pleasure for all of us to be given the opportunity to be a part of The Meat Puppets promotional team, and we want to thank Brandon Phillips and the entire Anodyne Records crew for all of their hard work. We can’t think of a better label than Anodyne to truly embrace the indie rock spirit of The Meat Puppets. They’ve been kind enough to set us up with plenty of copies of Rise To Your Knees for all of your on-air giveaway needs, so please don’t hesitate to be in touch if you’d like to get your hands on some. If you need more info, call Andy Gesner at 732-613-1779 or e-mail us at info@HIPVideoPromo.com /a>. You can also visit www.AnodyneRecords.com or www.TheMeatPuppets.com to find out more about The Meat Puppets.