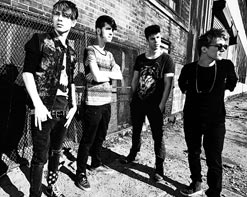 The young men of The Silent Scene are changing the game and making a new sound that defies expectations. Rather than settle for the limitations of a traditional four-piece band, they incorporate live programming, synths, and MPCs to create an innovative blend of electro-house, indie-dance, and alt-pop that is entirely their own. HIP Video Promo is pleased to present the candid clip for their new single, “Collecting Hearts.”

Don’t let their young ages fool you, this band has been cutting their teeth since the age of 12 when they won the Disney Idol contest under the former name, Kicking Daisies. Now they’ve grown from child prodigies to adults with unrivaled musical skills and are making a name for themselves as The Silent Scene. Starting with the familiar sound of electric guitars, singer Richie Arthur’s voice soon enters the mix on top of a soft, programmed beat, carrying a melody infused with tension and anticipation. But it doesn’t prepare you for the drop when “Collecting Hearts” blasts off into a world-class chorus with a knock-out hook over a dance beat that shakes the room. Guitars take a back seat to deep, fuzzy synth blasts, and Arthur’s clear, emotive voice, as he tries to make sense out of a relationship that is fated to end. “What’s the point of being alone? / Nothing feels like it did a long time ago.” Between their powerful sound and the caliber of their writing, it’s clear that this band is pushing the boundaries towards something big.

In the black and white clip for “Collecting Hearts” we are treated to a mix of candid footage of the band in various places: hanging out at home, working in the studio, and whipping up tons of energy on stage. The video captures a band that is down to earth, focused on their craft, and rightfully excited for the future. Although they were recently disqualified from the finals of VH1’s “Make A Band Famous” competition (because two of their members are just below the minimum age requirement), we are positively certain that things are about to heat up for The Silent Scene with the release of this video and the upcoming release of their debut EP Cities next month..

For more information on these genre-melding innovators and their new video for “Collecting Hearts”, please contact Andy Gesner at (732) 613-1779 or e-mail info@HIPVideoPromo.com . You can also visit www.TheSilentScene.com for more info.