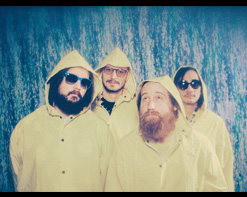 Philadelphia native ethereal indie pop band, The Soft Spots, is ready to spread dreamy synth-rock vibes and psychedelic aesthetics in their new “Goodbye Again” music video. Since the group’s early beginnings in 2012, consisting of lead singer-songwriter Shane Gallagher and the band’s drummer Dr. Deadbeat, The Soft Spots has been meticulously crafting the perfect blend of new-wave and art rock elements to develop its signature sound.

The band has gained several new members over the course of its lifespan, including Truong Ta on backing vocals and guitar, and Corey Pace on bass, keyboard, and vocal harmonies. Recently, The Soft Spots produced its single “Going Soft” after the addition of newest member, Johnny Price, who now contributes to harmony, guitar, and synth lines. The Spots’ latest single, “Goodbye Again” features a mix of each member’s area of expertise, establishing the group’s danceable indie pop style.

The “Goodbye Again” music video instantly takes viewers on a nostalgic trip by blending chaotic visuals with the song’s other-wordly nature. A rainbow of distortion is cast over the band as Shane sings about memories of past love. Color saturated grainy visual effects compliment the shimmering guitars and wavering synths featured on this compelling track. Hazy double exposed shots of the band while Shane sings “I don’t wanna fall in love again. I don’t wanna give it another try” perfectly capture the conflicting feelings one experiences when reminiscing on a past relationship, and contribute to the band’s psychedelic aesthetic.

The Soft Spots’ current discography includes its newest singles “Going Soft” and “Goodbye Again,” as well as two EPs released back in 2015 titled Gently Down The Stream and Life Is But A Dream. The band is set to release its debut full-length album, titled Rainy Daze, next month on March 15th, and has fans excited for a tour coming soon. Please don’t be shy about getting in touch to let us know what we can do on our end to secure The Soft Spots’ “Goodbye Again” video into your programming and rest assured we’ll have plenty of outstanding The Soft Spots merch to set up online/on-air contests and giveaways throughout the campaign. We’re very excited to see this video hit your playlists and as always, please feel free to contact Andy Gesner and the HIP Video Promo team at (732)-613-1779 or email us at info@HIPVideoPromo.com.