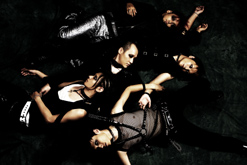 Hello music video aficionados! It’s Andy Gesner and the staff from HIP Video Promo, here today to spread the word about a band, a video, and a movement. One of the nicest things about doing this sort of work is the sense of being part of something happening. We love seeing new musical ideas and concepts take hold with American audiences. Great Japanese rock bands have been raging on the home islands for decades, but rarely have they made any commercial inroads in the United States. That’s all changing, and it’s a thrill to watch it unfold.

That J-Rock is heating up here in America is undeniable: the subgenre has its own festivals, its own websites (check out jrockrevolution.com, jrocksaga.com, jhouserock.com, just for starters), its own pantheon of heroes, and its own style. And as the success of the groundbreaking RockStar energy drink Taste Of Chaos tour generates, Japanese bands are connecting with U.S. hard rock audiences. Like D’espairsRay, the Underneath are stars of that tour, and they’ve been winning new fans all over America including thousands of kids who’ve never before heard a Japanese rock act.

How have these musicians made such a seamless transition to American stages – despite singing almost entirely in Japanese? To understand the immediate appeal of J-Rock favorites like the Underneath, it helps to know the recent musical history of the Land of the Rising Sun. Japanese popular culture has always emphasized drama, immediacy, and spectacle: exactly the characteristics that endear a talented band to a crowd of passionate headbangers. In the mid-90s, the “visual kei” movement changed the look of Japanese pop and rock alike: bands began dressing in wild costumes, putting on flamboyant stage shows, and foregrounding their sex appeal. Considering how well the so-called “visual” bands accomplished their aesthetic objectives, it’s no wonder that J-Rock artists have caught on with video-crazy American audiences. The only wonder is that it’s taken this long.

Without a doubt, visual kei-inspired bands such as the Underneath have been helped by YouTube and other viral-video websites. This quintet looks and sounds terrific: they’ve got an eye-popping appearance and an aggressive sound to match. “Gekkoh”, the roughnecked single from Moon Flower, the band’s debut, has already cut a bold slash through the Japanese underground. the Underneath are two-fisted for sure, but they’re also surprisingly melodic, and they’re sure hands with a power-pop hook. Don’t be surprised if, by the end of “Gekkoh”, you find yourself singing along phonetically with the Japanese chorus.

Satoru Azuma’s bold clip for “Gekkoh” focuses – rightfully – on the band in action. With their revealing leather-and-mesh clothing, their shiny black pants and boots, and their gravity-defying hairstyles, the Underneath present an arresting picture. In performance, the group oozes attitude; Taka, the aggressively androgynous singer, confronts the camera with a sneer and a wide-eyed stars. Azuma intersperses ominous images of locked doors and hallways in an abandoned factory – these heighten the mood, but they’re hardly essential. the Underneath are captivating enough: they’ll hold the attention of anybody interested in modern rock.

Once again, we’re very excited to be working with Jonathan Platt, Yvonne McDonald, and everyone at J Shock to spread the word about these deserving artists. If you would like to get your hands on some copies of Moon Flower for on-air giveaways or would like to catch up with the band during the Taste Of Chaos tour, please drop us a line and we’ll make it happen! If you need more info, call Andy Gesner at 732-613-1779 or e-mail us at info@HIPVideoPromo.com.