The Zombies “Any Other Way” 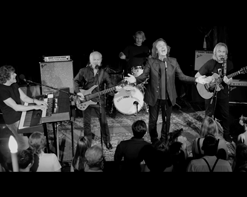 Since 1962, The Zombies have been entertaining and inspiring millions with their monumental music. Here in 2013, they’re back and better than ever with new songs that celebrate the past, present, and future. HIP Video Promo is excited to introduce their newest video known to date, “Any Other Way.”

This English Rock band formed in the early 60s in St. Albans. Led by Rod Argent, known for his impeccable talent on piano, organ, and vocals, and lead vocalist Colin Blunstone, the group scored British and American hits in 1964 with “She’s Not There” and “Tell Her No.” In 1969, their most successful tune “Time of the Season” hit the airwaves and revolutionized the music scene.

Odyssey and Oracle, The Zombies’ 1968 album, is comprised of twelve songs and is still ranked number 100 on Rolling Stone magazine’s list of the 500 Greatest Albums of All Times. Over the years, The Zombies have released a multitude of albums such as their newest studio album Breathe Out, Breathe In. Although they have changed line-ups, the band is still anchored by original members Argent and Blunstone.

Director Adam Lawrence combines both past and present influences in The Zombies’ latest clip “Any Other Way,” which just premiered on the coveted Rolling Stone website. Filmed in one of New York City’s hippest clubs The Cutting Room, the video displays a short love story as the teeming vocals capture the essence of the undeniable lyrics. “Any Other Way” is a fusion of what we have come to love about this band over the years, and it also highlights what’s next for this renowned rock band.

The Zombies tour the US and Canada every year, as they also do in The Netherlands and The UK, performing at such high profile festivals like SXSW, Bumbershoot , Milwaukee Summerfest and they even opened the season at Central Park Summerstage . On July 19, 2013, it was announced that the band would be appearing on the second annual Moody Blues Cruise set for sail in April of 2014. For more information on this exciting band, please contact Andy Gesner and the HIP Video Promo staff at (732)-613-1779 or email us at HIPVideoPromo@Gmail.com. You can also visit www.TheZombies.net for more info.