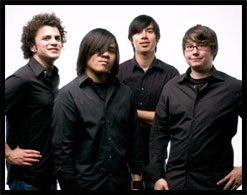 Autumn is right around the corner and I’d like to extend a warm hello to all of my music video programming kin! It’s Andy Gesner and the staff from HIP Video Promo, happy to bring you some of New Jersey’s favorite sons! Over the past four years, we’ve brought you some of the best videos from indie performers all over the world. But we’re indies too, proud of our local rock scene, and we admit to taking a special pleasure in introducing you to videos by bands from Central Jersey. The members of Tokyo Rose are cosmopolitans now: they’ve toured all over North America, invaded Japan with The Rocket Summer, and will be embarking on their first trip to Europe later this month. But before they shared stages with Relient K, Mae, and Taking Back Sunday, they were known as the Garden State’s best hope. But whether they’re rocking thousands at the Warped Tour or the Flipside Festival or just playing to a hometown crowd at the Bloomfield Avenue Café, they bring the same emotional intensity and the same commitment to musical excellence. We were here, so we can testify: everybody in New Jersey who saw this band in 2004 knew that by 2006, they’d belong to the world.

New American Saint, the most recent Tokyo Rose release, is the kind of album that demands mainstream recognition. Its roots are firmly in the rock underground, but the songs are as catchy and immediate as anything in heavy circulation on modern rock stations. The Internet press adored the record: “Raise your lighter to the power ballad sumptuousness of the title track and bang your head in frustrated romantic sympathy to the headlong rush, dense harmonies, and magically synched-up guitar tremolo of ‘Goodbye Almond Eyes’”, advised Rick Anderson in the All Music Guide. The quartet has since racked up over a million plays combined on MySpace and PureVolume, and its devoted following has spread from the swamps of Jersey to all corners of the globe.

“Spectacle”, the lead track on New American Saint, is a prime example of frontman Ryan Dominguez’s songwriting at its most earnest and incendiary. The pure-voiced singer and guitarist spins out a tale of heartbreak and missed connections, and threatens to build a monument out of the shattered pieces of the relationship. The urgency of its two-guitar attack and the inventiveness of the rhythm track on “Spectacle” are reminiscent of cuts from the first Foo Fighters album – but when Dominguez begins to sing, the result couldn’t be anybody but Tokyo Rose.

Pittsburgh-based Endeavor Media – the enterprise of 23-year-olds Danny Yourd and Steve Hoover – is a brand new production team that has already built itself an impressive videography. Over the past two years, they’ve created videos for many cutting-edge rock bands, including The Evan Anthem, Clearview Kills, and War Of Ages. They’ve concentrated on performance clips so far, but always with a twist: they’re never interested in getting in the way of the band, but they’re able to cleverly augment what makes the combo unique. The “Spectacle” video shows viewers something that Tokyo Rose audiences know well – in concert, the group is sledgehammer-fierce but always approachable. But there’s something going on in the clip besides the performance. A young man surrounds himself with crumpled-up pieces of paper: evidently a love note that he can’t get right. Over time, the stack of failed efforts becomes a monolith, and he ends up in the corner of a warehouse, facing the pile, hypnotized. Finally he inspects a sheet and finds the center torn out; disgusted at himself, he finds a trap door and leaves the building (and his own solipsism) behind.

We are thrilled to be working with James Cho and all of the peeps at Sidecho Records. We’ve admired this label for a long time and are excited to finally have the chance to work together. Tokyo Rose will be on tour from now until the end of October, so if you’d like to set up video interviews or would like copies of New American Saint for on-air giveaways, don’t hesitate to be in touch. If you need more info, call Andy Gesner at 732-613-1779 or e-mail us at info@HIPVideoPromo.com.