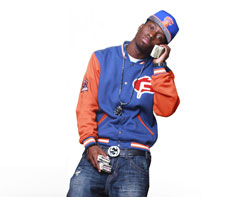 The HIP Video Promo staff and Andy Gesner are pleased to introduce a fresh face to the hip-hop music scene, Trigg Da Kidd. With roots from Pontiac, Michigan to Kinston, North Carolina, Trigg Da Kidd has seen it all. He has hustled himself to the top by making an all-inclusive name for himself. With a sound like Lil Wayne, clothes like Kanye West, and classic references to Run DMC, this artist has his own style with his own set of rules that engages us and pulls us closer to the world of hip-hop music with every lasting rhythmic beat.

As the eldest of five siblings, he struggled throughout the streets of Michigan through a youth full of fast money, which soon outweighed his long-term goals of reaching his dream of becoming a hip-hop sensation. After a brief embarkation of several crime sprees that landed him a spot in juvenile detention, he and cousins Fuco Bunkin and Sir Roc decided to begin a musical group called G-Ville. Unfortunately, the music group was a menace to society, and this landed Trigg more detention time. After spending most of his teenage years in confinement, he finally went to jail. He served time at a juvenile boot camp, and afterwards decided to turn his life around for good and embark on his true life-long dream—music.

With a clean record and an entirely different mindset, his debut album called Ceilin Fans is in full anticipation. He has been promoting a college tour, where he has been promoting his new singles. In addition to, he has collaborated with label mate, Brandon Thomas, to found the E365 Empowerment Group for troubled youth. As he has experienced all throughout his teenage years, Trigg Da Kidd is searching for those who are troubled and in need of guidance. Although it seemed as if he had been alone all throughout those tough times, he has finally realized that music has been by his side the entire time.

In the video for his song “Racks and Rubberbands,” we see the playful side of Trigg Da Kidd. The scenes of the video are packed with nice cars, fancy jewelry, and beautiful women. This is a shopping spree that even the Hilton sisters would blush at! Now we know what you’re thinking, “hasn’t this been done before”? Trust us, you haven’t seen or heard anything quite like Trigg Da Kidd’s look or style before. Trigg Da Kidd’s sound is entirely of its own, and yet somehow all of the classical sounds of the hip hop masters of the past shine through every beat. And because Trigg is such a prolific artist, we’re including a second video for you and your viewers to enjoy. This one is called “Alien Is…” and it comes at you with the same intensity and skill as “Racks”. Like a darker extension to “Racks and Rubberbands,” “Alien Is…” is basically Trigg reminding us all that he isn’t going anywhere. With black lights and body paint, there is an extraterrestrial feel to this feel good song, and it both inspires and awes us as the audience. We’re psyched to discover this new talent and are certain you and your viewers will latch onto it like we have!

From rags to riches, Trigg Da Kidd has experienced it all. Although he has seen a lot of rough patches, he is doing all he can to be a positive male role model to the troubled youth of today, the interesting part is that he does so through the power and movement of his music. For more information on Trigg Da Kidd and his new videos please contact Andy Gesner at (732)-613-1779 or email us at info@HIPVideoPromo.com.