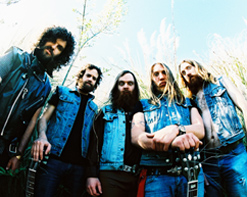 Greetings to all of my hard rocking friends nationwide! It’s Andy Gesner and the staff from HIP Video Promo, back with another provocative new clip from a courageous independent heavy hitting rock band. In 2005, Valient Thorr debuted with an arresting album (the furiously-rocking Total Universe Man) and an equally audacious backstory. Using the auspicious pretense of traveling from Venus and being stranded on earth sets the stage for Valient Himself’s “outside looking in” commentary on politics and media manipulation. (The original “Valiant Thor” is one of the best-known “blue book” reports about alien contact and UFO sightings.) But the group’s terrestrial activities proved them to be dedicated, gimmick-less rockers to the core: Valient Thorr hit the road hard, rocking the Volcom stage on the Vans Warped Tour and making the main stage from time to time (and believers all the time), and gigging to packed houses almost every night. Meanwhile, the theatrical, straight-over-the-top, irony-free Total Universe Man became a leftfield hit, garnering rave reviews from All Music Guide and Punknews.org, and positioning Valient Thorr as major players in the heavy rock revival of the mid-‘00s.

So what does a gang of longhaired, heavy-metal “spacemen” do for an encore? Those who expected them to blast off to the nether reaches of interstellar space are in for a surprise. Legend Of The World is a remarkably sharp, well-written album that takes this planet as its subject. And according to the Thorrs, it’s a world in trouble: wrecked by war, climate change, selfishness, and the threat of nuclear Armageddon. Here, Valient Thorr puts their wattage at the service of their social commentary, supporting their critique with slamming beats, squalling guitar, and singer Valient Himself’s authoritative bark. Activision and Red Octane were certainly impressed: they made “Fall Of Pangea”, the centerpiece of Legend Of The World, one of the unlockable songs in their critically-acclaimed PS title Guitar Hero II.

Lead single “Exit Strategy” doesn’t mince words – it’s a vicious assault on the Iraq War and the seductive logic of militarization. Over Sabbath riffs, Valient Himself shouts out a Fish Cheer for the modern age: “They sent your son with a plan/ to fight some war in a desert land/ he ain’t gonna come home again/ he’s making some money for a Texas man.” Think of it as an anti-recruitment pitch: a message that Valient Thorr hopes to get to would-be soldiers before they enlist. Other songs, like the uncompromising “Goveruptcy” and the relentless “False Profits” extend and deepen the argument, and plead for greater public awareness. This winter and spring, Valient Thorr will continue taking the message to the people, touring the country with Fu Manchu.

Charles Cardello and the rest of the Bifocal Pictures team were proud to work with talented, prolific, and somewhat infamous punk comic artist Brian Walsby on the Valient Thorr “Exit Strategy” video. To begin this four month long process, the band set up in a room entirely covered in sheets of white paper from floor to ceiling. The band is then filmed playing the song from a multitude of angles and edited the resulting footage into a live performance video. This edited performance was then exported frame by frame into Photoshop where we added the many varying settings found in the video. These frames were then printed out on a laser printer (over 2400 of them!) and manipulated individually. After meticulously composing every frame with many other printed paper elements (jets, bombs, helicopters, world leaders, and the comic art/ animation of Brian Walsby); each composition was scanned back in and re-inserted into the timeline of the video. The resulting work is an animated video (made entirely of paper) so dense with politically charged content that viewers will notice something new every time they watch it.

The Bifocal Media clip for “Exit Strategy” matches the polemical intensity of the song. Live-action footage of the band morphs into line drawings; these, in turn, are superimposed over images of the White House and American flags. From time to time, these drawn “pages” are folded back, revealing caricatures of political leaders and pointed cartoons. Bifocal and Valient Thorr make clever use of recruitment posters of other eras – animated versions of familiar icons from past wars swoop at the camera in succession. War-cheerleading persists, even in the face of past mistakes; our only recourse, they seem to suggest, is to howl the truth in the direction of power.

Here at HIP, we’re incredibly excited to be working with Mike Nobrega and everyone at Volcom Entertainment for the first time because we know the Valient Thorr video is sure to take off in a blitz of programming activity. Please help us expose this intriguing band and give this video the programming attention we feel it deserves. Valient Thorr will be criss-crossing the US through the Spring, so if you’d like to set up any video interviews with Valient Thorr for your program, we’d be more than happy to set you up. This band is all about being interviewed and rest assured they won’t disappoint. We also have plenty of copies of Legend Of The World for your listening and on air giveaway needs. If you need more info, call Andy Gesner at 732-613-1779 or e-mail us at info@HIPVideoPromo.com. You can also visit www.ValientThorr.comto find out more about Valient Thorr.