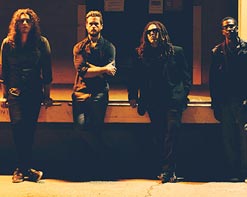 With a gritty and soulful take on blues-rock that hits a heavy, primal groove, The Voodoo Fix make a hypnotic sound that truly seems infused with a powerful magic. Formed in Los Angeles in ’07, the band quickly hit the road hard, relentlessly touring, and developing an astounding, must-see live show. Infiltrating the jam-circuit with their heavy, “hypno-rock”, the band readily stood out from the pack, earning a legion of supporters (known as the “Voodoo Crew”), and building serious buzz. Now, the band is on the cusp of releasing a brand new EP. Recorded with a Nashville-based production team, Step Right Up captures the unique, dynamic essence of The Voodoo Fix, complete with howling vocals, saturated guitars, and nasty grooves. HIP Video Promo is proud to present the clip for their brand new single, “Hard to Change (Let It Go).”

Showcasing The Voodoo Fix’s many strengths, this track serves as a perfect introduction to this fantastic band. Breaking directly into a sultry and swampy guitar riff over a heavy groove, the band smolders and simmers until a dusty harmonica squeals and Abe Rivers’ irrepressible vocal presence enters the mix. With power, plenty of style, and a growl to be reckoned with, Rivers delivers each lyric with soul-searing intensity. And when he sings, “It’s hard to change”, everyone relates. Meanwhile, the band provides a genuine, foot-stomping, blues-rocking chassis to drive this song directly into your brain.

The video–directed by HIP alumni The Skies Revolt’s David Prindle–captures the thick and powerful vibe of The Voodoo Fix with engaging performance footage, and crosses it with special effects borrowed from the heyday of music video mania. As the band plays, the designs upon their t-shirts animate themselves, in a purposely choppy fashion (think Peter Gabriel’s “Sledgehammer”). There’s a pair of hands clapping, a clock turning, and a heart beating. It’s everything a band needs for a shot at greatness: rhythm, time, and lots of heart. Thankfully, the Voodoo Fix has plenty of all three.

For more information on the Voodoo Fix and their new single and video, please contact Andy Gesner at (732) 613-1779 or e-mail the HIP Video Promo staff at info@HIPVideoPromo.com . You can also visit www.TheVoodooFix.com/ for more info.