We Are The Catalyst "Don't You Worry Child" 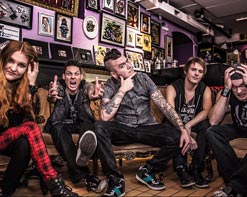 Since their formation in late 2012, Sweden’s We Are The Catalyst have been establishing themselves as one of Europe’s most exciting and compelling musical acts. Their debut EP, Panem Et Circenses, was a critical and fan favorite, earning the band spots on several major soundtracks and video airplay in over 20 countries. Considering their pedigree, this shouldn’t come as a surprise. Principal members Cat Fey and Kenny Boufadene spent years touring with the metal act One Without (sharing bills with Dead By April, Katatonia, and more as well as releasing albums on Lifeforce Records) and have channeled their skills and passion into We Are The Catalyst

The new release, Monuments, tops everything we’ve come to expect from WATC. Released here in the US by Seven13 Music, it hits harder, it soars higher, and it cuts just a little bit deeper. Case in point is their new single for “Don’t You Worry Child,” a blunt assessment of the heartbreaking truths surrounding child abuse in the world and the steps that we can all take to help end this terrible affliction.

The “Don’t You Worry Child” video is a kick straight to the heart of the viewer that will be felt in the pit of the stomach and tug on the heart strings of viewers far and wide. The video begins with a sincere address by none other than Jerry Springer, asking viewers to show their support for “Don’t You Worry Child,” as all proceeds from the single will go to The Fostering Network and helping children in need find loving homes.

A sweet and innocent blonde girl is at the heart of this story, which begins with her in an abusive household with a mother who is incapable of showing her maternal side and a father who is physically abusive to both mother, daughter, and the baby in the house. She is soon taken out of the dangerous situation and placed in a foster home. This is where she is faced with a new set of challenges. Even though she is safe, she is suffering the ill effects of an abusive upbringing, and the separation from her baby brother, whom she had sworn to protect. As is common in these situations she lashes out at her foster parents and pushes the limits, either in a plea for attention or simply exhibiting anger at the hand she has been dealt. It’s no small task for the foster family and just when the girl is convinced that she will be moved onto her next home they surprise her by doubling down on their love and conviction of giving her a better life. It’s a real tear jerker of clip, but the message is a hopeful one and a reminder that we should do our best to always care for our most vulnerable.

It’s our pleasure to join forces with We Are The Catalyst and Seven13 Music to bring you this touching music video and hope that you will join us in hearing their message. We would love to help you spread this message far and wide, so please get in touch to let us know what we can do to get this video into your programming. If you need more information, please contact Andy Gesner and the HIP Video Promo team at (732)-613-1779 or email us at info@HIPVideoPromo.com . You can also visit www.WeAreTheCatalystOfficial.com for more info on We Are The Catalyst.