West Without “Give Me Your Heart” 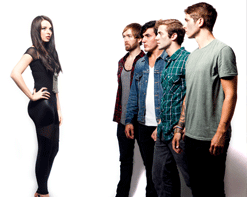 Hailing from Baton Rouge, Louisiana, West Without is an indie-alternative rock that blends soulful male and female vocals with a luscious guitar-driven soundscape. With a tangy, sultry vibe, the band’s latest single “Give Me Your Heart” is shaking airwaves, and HIP Video Promo is pleased to introduce the new video clip.

After forming in Baton Rouge in 2012, West Without spent a year in the studio recording and perfecting their sound. The group’s seven-song EP was released independently in May 2013 and is available on iTunes. Individual tracks have been made available through Soundcloud, YouTube, and the band’s Facebook page.

The band has been performing the self-titled EP live since July of 2013, and have been touring throughout Louisiana and Texas. West Without is currently working on material for the anticipated full-length album, which will be a first for the band. In the meantime, they have teamed up with Rougarou Films to create a short film for the single, “Give Me Your Heart.”

The clip was shot on location across Mississippi and Louisiana. “Give Me Your Heart” has a playful, yet dark thriller theme in which we witness the witch-like character of lead singer Raine Landry rise from the dead of her final resting place in a lake and hunt down and punish the four men who put her there (played by the rest of the band). These men have done a very evil thing and Raine is there to make sure they atone for their wrongdoings, with a swift and deliberate punishment. In the midst of flashbacks and current scenes, the sultry sound of the single makes the video all the more haunting and sends viewers to the edge of their seats. This song has been stuck in our heads since the moment we heard it and we can’t wait to share it with you!

West Without has quickly made a name for themselves throughout the southern states, and thanks to this outstanding video it won’t be long until this band takes hold of the rest of the world. For more information on this exciting new band, please contact Andy Gesner and the HIP Video Promo staff at (732)-613-1779 or email us at info@HIPVideoPromo.com .